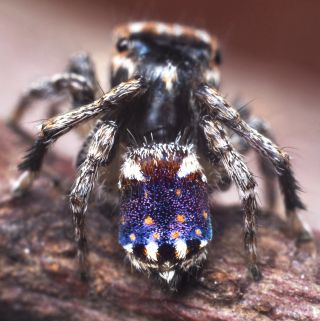 Peacock spiders (genus Maratus) are known for their luminous badonkadonks, which males use to dazzle potential mates through sexy spider courtship dances. Scientists have discovered 85 species of peacock spiders since the late 1800s, each arachnid decked out in a unique pattern of iridescent scales that some researchers have labeled "the world's smallest rainbows."

Now, an entomologist with Museums Victoria in Australia has described seven brand new species of peacock spiders, thanks largely to crowd-sourced photos sent in from citizen scientists across the continent. (All but one Maratus spider lives in Australia; the outlier was discovered in China). Included among the new species is the looker shown in the photo above — Maratus constellatus, which entomologist Joseph Schubert named in honor of the twinkling blue-and-yellow heavens in Vincent Van Gogh's iconic painting "The Starry Night."

M. constellatus and his six fellow additions to the peacock spider family — named M. azureus, M. laurenae, M. noggerup, M. suae, M. volpei and M. inaquosus — are described in a study published March 27 in the journal Zootaxa. You can take a look at the whole shimming crew in the gallery below.

A male peacock spider is more than just a pretty abdomen, of course. A 2018 Nature study found that each scale on the spider's behind is made of tiny, grate-like structures that can split different wavelengths of light at different angles, refracting a wide array of colors over extremely small distances. Studying these scales could inspire new optics and color technology, particularly where fine-scale color resolution is required in small packages, as in instruments on space missions, researchers wrote in that study.

Those potential applications are likely years down the road. Meanwhile, M. constellatus can wiggle his shiny butt at us anytime he wants.