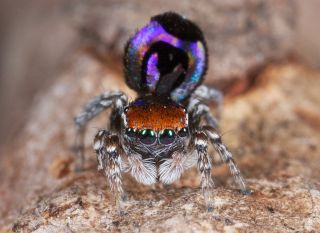 Nature's smallest rainbow can be found on the butt of the peacock spider Maratus robinsoni.
(Image: © Picture supplied by co-author Jungen Otto.)

When a male Australian peacock spider wags its bottom at you, it's impossible to look away. In the throes of courtship, the spider's glittering badonkadonk shimmers with all the colors of the rainbow, diffracting intense iridescent light like a living Lisa Frank sticker.

Scientists calls the spectacle "nature's smallest rainbow" — in fact, peacock spider bodies measure at most 5 millimeters (0.2 inches) long, according to a new paper published online in the journal Nature Communications. The researchers also noted that the flashy display is the only known example in nature of males deploying all the colors of the rainbow to entice females during courtship. [In Photos: Meet 7 New Species of Peacock Spider]

The team of researchers from the United States, Belgium, the Netherlands and Australia think they know how two species of miniature peacock spiders (Maratus robinsoni and Maratus chrysomelas) get the dazzling job done. The trick, the researchers say, is in their scales.

"M. robinsoni and M. chrysomelas have two types of visually distinct abdominal scales: rainbow-iridescent scales and velvet black scales," the researchers wrote in their new paper. "These scales show strikingly different morphologies: The black scales are brush-like and randomly oriented, while the rainbow-iridescent scales are more orderly aligned, cling to the cuticle surface and have bulky 3D shapes."

The researchers took a closer look at these bulky, iridescent scales using a variety of imaging techniques,to better understand the surfaces' unique rainbow-scattering properties. The team discovered that each iridescent scale contains a series of three-dimensional, parallel grates used to split different wavelengths of light at different angles.

"The unique grating configuration of each M. robinsoni scale disperses the visible spectrum over a small angle, such that at short distances, the entire visible spectrum is resolved, and that a static microscopic rainbow pattern distinctly emerges," the authors wrote.

These insights allowed the team to successfully fabricate their own miniature rainbow-scattering surfaces based on the same pattern seen on the spiders' scales. According to a statement from the University of Akron (which participated in the study), this spider-inspired knowledge could help push the boundaries of optics and color technology, particularly where fine-scale color resolution is required in small packages, as in instruments on space missions or wearable chemical-detection systems. Still, more work is required to match the spiders' exact capabilities.

"As an engineer, what I found fascinating about these spider structural colors is how these long-evolved, complex structures can still outperform human engineering," Radwanul Hasan Siddique, a postdoctoral scholar at Caltech and a co-author of the new research, said in the statement. "I wonder how the spiders assemble these fancy structural patterns in the first place."