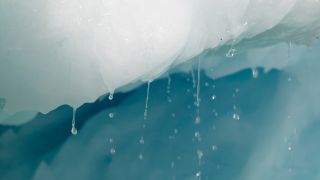 Ice melts on an iceberg on the coast of Greenland.
(Image: © Greenpeace/Nick Cobbing)

These are just a few of the impacts that scientists are already documenting across the planet after decades of human-driven climate disruption. And there's far worse to come if climate-damaging activities continue unchecked, according to a report released today (Sept. 25) by the Intergovernmental Panel on Climate Change (IPCC), the United Nations body tasked with evaluating climate change (also referred to as global warming) documented by the latest research.

Only swift and decisive governmental actions to dramatically reduce greenhouse gas emissions due to fossil fuel burning on a global scale will reduce the harm of this runaway climate catastrophe, according to the report, which is a compilation of data from nearly 7,000 studies and represents the work of 104 researchers from 36 nations.

The Special Report on the Ocean and Cryosphere in a Changing Climate (SROCC) presents the latest evidence of climate change that is already underway and is an urgent wake-up call "telling us that we're on thin ice and running out of time to act," said Bruce Stein, chief scientist for the National Wildlife Federation (NWF).

If fossil fuel use isn't reduced and global warming continues on the present trajectory, the consequences for both wildlife and humans could be catastrophic, according to the IPCC.

"Nearly 50% of coastal wetlands have been lost over the last 100 years, as a result of the combined effects of localised human pressures, sea level rise, warming and extreme climate events," the IPCC wrote in the report. By 2100, seas could rise by more than 3 feet (1 meter), displacing millions of people; approximately 680 million people live in coastal areas worldwide. And as sea levels continue to rise, once-in-a-century floods could take place at least once a year by 2050.

By 2050, marine heat waves will be 50 times more frequent than they were at the dawn of the 20th century, and the uppermost ocean zones could lose more than 3% of their oxygen, decimating populations of sensitive marine animals and harming fisheries, according to the report. Glaciers could be reduced by as much as 36%, while snow cover will drop by around 25% by 2100, affecting about 4 million people who live in the Arctic and around 670 million people who inhabit mountainous regions.

The widespread loss of ice and snow could lead to water shortages, affect food security, intensify droughts and contribute to the spread of wildfires, the IPCC said.

Though ice- and snow-covered locations like Antarctica, the Arctic and high mountain ranges may seem remote to many people, "we depend on them and are influenced by them directly and indirectly in many ways — for weather and climate, for food and water, for energy, trade, transport, recreation and tourism, for health and wellbeing, for culture and identity," IPCC Chair Hoesung Lee said in a statement.

Emerging evidence also suggests that in recent decades, warming oceans have fueled an increase in tropical hurricanes ranked Category 4 and higher, according to the report. What's more, projections show that thawing permafrost will release an estimated 1,460 to 1,600 gigatons of greenhouse gases — about as much as is currently held in Earth's atmosphere — by the end of the century and beyond, which will further accelerate climate disruption.

Earth's fate hangs in the balance; warming has already climbed to 1.8 degrees Fahrenheit (1 degree Celsius) above preindustrial levels. But limiting global warming to the previously proposed target of 2.7 F (1.5 C) will forestall the worst-case scenarios proposed in the report.

"We will only be able to keep global warming to well below 2 degrees C above pre-industrial levels if we effect unprecedented transitions in all aspects of society, including energy, land and ecosystems, urban and infrastructure as well as industry," Debra Roberts, co-chair of the IPCC Working Group II, said in a statement.

"The more decisively and the earlier we act, the more able we will be to address unavoidable changes, manage risks, improve our lives and achieve sustainability for ecosystems and people around the world — today and in the future," Roberts said.

However, even under that limited warming, scientists warn that hotter oceans overall are "virtually certain," and they predict the loss of approximately 90% of coral reefs in warm waters worldwide, according to the report.

"The science is both chilling and compelling," Taehyun Park, a global climate political adviser with Greenpeace East Asia, said in a statement.

"The impacts of human-made carbon emissions on our oceans are on a much larger scale and happening way faster than predicted," Park said. "It will require unprecedented political action to prevent the most severe consequences to our planet."