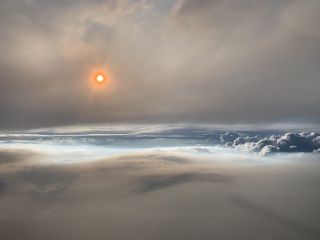 The view from inside a pyrocumulonimbus, or fire cloud, is an otherworldly sight.
(Image: © David Peterson (U.S. Naval Research Laboratory))

It looks like a sci-fi vision of another world, but it's actually the blazing heart of a fire cloud floating above our own planet.

The image, shared online by NASA Earth Observatory (NEO), was snapped in skies over eastern Washington state at an altitude of about 30,000 feet (9 kilometers) as a NASA pilot flew into a so-called fire cloud. This phenomenon, also known as a pyrocumulonimbus or PyroCb cloud, occurs when heat and moisture from wildfires rise up into the atmosphere and form smoke-filled thunderclouds atop the fire's plumes, NEO reported.

In the photo, taken on Aug. 8 at 8 p.m. local time, puffy, white clouds hover in the right side of the picture in a horizontal strip of bluish light, while the top and bottom of the image glow orange. The sun glows in the upper left corner, transformed by an orange halo; particles from the fire far below reflect light and lend the sun its orange color, according to NEO.

Though they may be beautiful, fire clouds are also disruptive. When wildfires generate thunderstorms, those billowing clouds act like chimneys, funneling smoke and particles into the lower stratosphere, the atmospheric layer between 6.2 miles (10 km) and 31 miles (50 km) above Earth’s surface. These materials get funneled in quantities that are comparable to those of an erupting volcano, Live Science previously reported. A single fire season in western North America can generate up to 25 intense fire-cloud events.

Lightning strikes that hit on Aug. 2 ignited the wildfire at William Flats in the Colville Indian Reservation near Spokane, Washington, NASA reported. The fire spread quickly across more than 10,000 acres (40 square kilometers), feeding on dry brush, timber and short grass. As of Thursday (Aug. 15), the fire had burned more than 45,000 acres (182 square km) of William Flats, but the perimeter was about 81% contained, according to the fire information site InciWeb.

To better understand how wildfire smoke affects air quality and weather in the United States, researchers with the field campaign known as Fire Influence on Regional to Global Environments and Air Quality (FIREX-AQ) investigate events like the William Flats fire. In this case, the group sent NASA's flying laboratory, a Douglas DC-8 jetliner, around and into a towering fire cloud over the Washington inferno, NEO reported.

While instruments on the flying lab collected samples from the cloud, David Peterson, a FIREX-AQ forecaster who was on the plane, snapped the spectacular photos. Peterson captured another image while the plane was outside the fire cloud, showing smoke plumes extending upward from the ground, with a dollop of pillowy, white storm clouds piled on top of them.

Images of large fire clouds are exceptionally rare, "especially from the air," Peterson said. "The views were absolutely stunning."