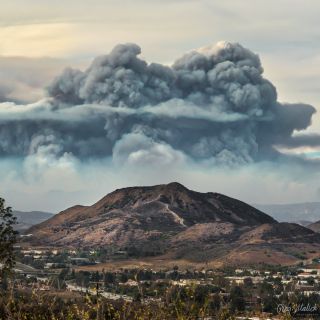 On Sunday (Dec.10), a massive gray cloud formed over Southern California's Ventura and Santa Barbara counties, filling the sky with dark towers of smoke and shocking onlookers for miles around. The ominous cloud looked like an ash column from a volcanic eruption, but the culprit was a wildfire.

The cloud, created by the ongoing Thomas Fire that has scorched more than 230,500 acres (93,280 hectares) of Southern California, is an example of a pyrocumulus cloud — literally, a puffy cumulus cloud formed by the hot air and smoke released into the sky during wildfires and volcanic eruptions. [Wildfires Blaze in Northern California (Photos)]

These clouds tend to be gray, brown or black because of the smoke in the air, and can tower up to 5 miles (8 kilometers) high, according to NASA. But besides being terrifying, pyrocumulus clouds can develop dangerous weather systems of their own, and potentially lead to more and harder-to-tame wildfires, Nauslar told Live Science.

Clouds of smoke and flame

Cumulus clouds take their name from the Latin word "cumulo," meaning "heap" or "pile." The fluffy, white cumulus clouds that commonly appear in the sky form when hot, moist air is warmed by Earth's surface and begins to rise. The air cools as it rises, eventually condensing into water droplets that cling to airborne particles called condensation nuclei. As more droplets condense, they release more heat, creating a feedback loop of rising moisture that can result in the giant, puffy cloud heaps.

Pyrocumulus clouds form similarly, but in much more extreme circumstances of heating and condensation. While the hottest summer days might break triple-digit temperatures, a wildfire can rapidly warm the surrounding air to more than 1,470 degrees F (800 degrees C), according to a report from the Natural History Museum of Utah.

The rising air condenses rapidly as it pours into the sky above the flames. Meanwhile, burning vegetation on the ground evaporates all of its moisture, compounding the condensation above. Particles of smoke already swirling through the air give water droplets even more condensation nuclei to grip onto, resulting in sudden, massive columns of moisture and smoke rolling into the sky over the blaze. From there, Nauslar said, another feedback loop may occur.

"As the air is forced upward, [it pulls] more oxygen into the bottom of the column," Nauslar said. "This can help sustain and strengthen the fire. It will also result in stronger and less-predictable winds."

Creating its own weather system

The hot, fast jets of rising air within pyrocumulus clouds tend to create a highly turbulent atmosphere, which can result in some unusual weather effects. If a cloud column builds high enough, for example, it can become a pyrocumulonimbus cloud — essentially, a fire-fueled thunderstorm cloud, NASA said.

In humid conditions, such clouds can actually produce rainstorms that put out the fire that created them, according to CNN. But in dry environments, like Southern California, rainfall is more likely to evaporate within the cloud itself, never reaching the ground. Even in the absence of rain, so-called "dry" lightning bolts can rip through the cloud or plunge to the surface, potentially sparking new fires, a National Weather Service report said. (The eerie phenomenon of volcanic lightning occurs under similar conditions.) The clouds pose less dramatic dangers, too.

"Pyrocumulus clouds can increase [wildfire] spotting, since you are lofting more embers higher into the atmosphere, which can increase the horizontal distance the embers travel," Nauslar said. And if a large pyrocumulus column becomes too unstable, it may even collapse onto itself.

"A collapsing pyrocumulus cloud can have serious ramifications," Nauslar said. "It would cause very strong and erratic winds at the surface and increase spotting as the embers reach the surface. This would be dangerous for anyone nearby."