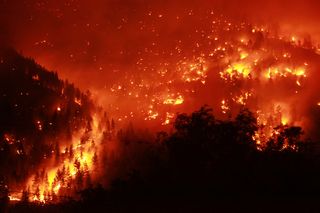 As the smoke settles from 2018's fires at the close of the year, it serves as a stark reminder of the raging wildfires that have plagued California and the rest of the American West. More than 8.5 million acres (34,600 square kilometers) burned this year, according to the National Interagency Fire Center, and they burned faster and hotter than experts have ever seen.

But how do such wildfires start in the first place?

Fire arises out of three ingredients: fuel, heat and oxygen. Oxygen is readily available in the air, so that leaves fuel and heat. The fuel is anything that will burn, including brush, grass, trees and even houses. The dryer the fuel, the more easily it burns. And the last component — heat — burns the fuel and desiccates, or dries up, the surrounding area as the fire spreads. [What Is Fire?]

In other words, "a source [of heat] hits receptive fuel that's dry enough to burn," said Lenya Quinn-Davidson, a fire analyst for the University of California Cooperative Extension forestry program in Northern California. In the right conditions, those three factors are all it takes to set a wildfire in motion.

These natural disasters, however, often have unnatural beginnings.

In the United States, 84 percent of the 1.5 million wildfires reported from 1992 to 2012 were human-caused, while 16 percent were sparked by a lightning strike, according to a 2017 study published in the journal the Proceedings of the National Academy of Sciences. For instance, a spark caused by the scrape of a tire rim on the asphalt started the Carr Fire in Redding, California. Last month's Camp Fire is still under investigation, but malfunctioning power lines are suspect.

However, ignition is only the beginning. For a spark to grow into a sustained wildfire, there must be a perfect combination of factors, such as "dry conditions and really strong winds," Quinn-Davidson told Live Science. And because of climate change, dry conditions are lasting longer and, in turn, causing longer fire seasons.

"Fifty years ago, mid-November was wet. Maybe we would have [strong] winds, but it would be too wet to start a fire [in California]," Quinn-Davidson said. But mid-November of 2018 was dry enough to perpetuate the most deadly and destructive fire in the Golden State's history.

Though it's been a record-breaking year in California, wildfires are not new. In fact, they are a natural and necessary part of many ecosystems, including California's forests. But the wildfires we see today are different from those natural blazes, burning faster and hotter.

"Historically, California burned more than it does now, but at [a] lower intensity and slower," Quinn-Davidson said. "Now, we are seeing fires that are unusual, like the Camp Fire that, at one point, burned through 70,000 acres [about 280 square km] in a day. We've never seen that before."

The change in our climate, perpetuated by human-made greenhouse gas emissions, extends the window of the annual fire season. But wildfires also burn faster and hotter simply because there is more fuel to burn.

For example, the boreal forest in Canada and Alaska has seen an increased number of lighting-ignited wildfires since 1975, likely due to earlier snow melts and fuel drying brought on by global warming, a 2017 study in the journal Nature Climate Change found.

There has been a "war on fire" over the past 100 years or so, Quinn-Davidson said. And that, ironically, has increased the risk of large fires. Today, scientists and conservationists understand that fire is a critical factor in the health of ecosystems. But that wasn't always the case. Suppressing smaller fires for the better part of a century allowed fuels to build up. Forests that were once park-like — open, with with big trees — became dense with small trees and brush, the perfect fuel for a fire.

As the fuels amassed, humans moved closer to wildland areas, according to a 2018 study in the Proceedings of the National Academy of Sciences. Establishing less-than-strategic communities right on the edge of thicketed forests has put more lives and homes at risk, the study found.

Based on the Fourth National Climate Assessment, completed just last month, wildfires will continue to intensify with the changing climate, maybe even becoming a problem in other regions of the United States. So, communities need to focus on becoming more resilient to these natural disasters, Quinn-Davidson said.

But she added that she's hopeful, because many communities are already taking steps and setting precedents. "A lot of communities [are] actively working on becoming fire-adaptive [and learning] how to live with fire and design a community in a way that is not so vulnerable," Quinn-Davidson said.