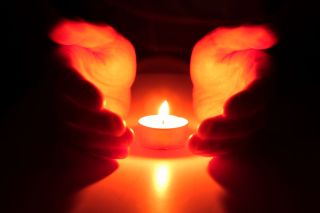 Fire is a chemical reaction that releases light and heat.
(Image: © Candle image via Shutterstock)

Prometheus stole it from the gods and bequeathed it to humans. Aristotle defined it as one of the four essential elements. Since its earliest known controlled use 1,420,000 years ago, fire has inspired stories and speculation.

Early chemists believed that fire was caused by the liberation of a substance, phlogiston, found in every combustible material. But observations made in the late 18th century revealed a decidedly less mysterious ingredient: oxygen.

Fire is a chemical reaction that releases light and heat. The display usually marks the meeting of a combustible material and oxygen, although other chemicals can spark flames as well. These flames occur when small particles of the combustible material are heated to the point of incandescence and shot upward.

Given a steady supply of fuel, this exothermic reaction will continue unabated. But fires consume combustibles greedily, hence the need to frequently feed your fireplace to keep the flames ablaze. Even the sun — which creates heat and light in nuclear reactions that involve the fusing of hydrogen atoms into helium — will burn through its fuel in about four billion years. If we're still around, expect all manner of chaos.