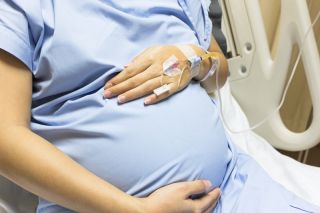 A surprising number of pregnant women delivering babies at two New York City hospitals tested positive for COVID-19 without showing symptoms, according to a new study.

The findings suggest that the true rate of COVID-19 infection in the city overall could be much higher than thought.

In the United States, people are generally tested for COVID-19 if they have serious symptoms, and so exactly how many people have the disease is unclear.

But to prevent the spread of COVID-19 in the hospital setting, doctors at Columbia University Irving Medical Center and New York-Presbyterian Allen Hospital recently implemented universal COVD-19 screening for all pregnant women admitted to their hospitals for delivery.

"More than one of eight asymptomatic patients who were admitted to the labor and delivery unit were positive for SARS-CoV-2," the authors wrote in their paper, published Monday (April 13) in The New England Journal of Medicine.

Because the study included only pregnant women in New York City, the results may not apply to the general population.

Pregnant women are known to be at increased risk for certain infections, such as the flu, but it's unclear if they are at higher risk of contracting COVID-19. However, based on current information, pregnant women seem to have the same risk of COVID-19 infection as adults who aren't pregnant, according to the Centers for Disease Control and Prevention.

Some doctors not involved with the study said the findings suggest a high rate of infection in the general population in areas with lots of COVID-19 cases. (With more than 200,000 confirmed cases of COVID-19, New York has by far the highest number of coronavirus cases in the U.S.)

"This study suggests that in hot spots like New York City, the level of #COVID19 exposure … could be high," Scott Gottlieb, former Commissioner of the U.S. Food and Drug Administration, posted on Twitter on Monday (April 13). "Not the 50%-66% needed to confer herd immunity, but much more than 10%." (Herd immunity refers to the idea that once a certain number of people have experienced a disease and developed immunity to it, that protection extends to a larger population.)

The authors added that "the true prevalence of infection may be underreported because of false negative results of tests to detect SARS-CoV-2."

Overall, the findings underscore "the risk of COVID-19 among asymptomatic obstetrical patients," the authors said. Access to data on universal screening in hospitals "provides an important opportunity to protect mothers, babies and health care teams during these challenging times," they concluded.