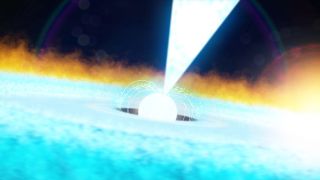 A neutron star 11,000 light-years from Earth recently shot off the most powerful burst of X-ray energy ever detected by the International Space Station. NASA astronomers have traced it back to a mighty two-part explosion.
(Image: © NASA's Goddard Space Flight Center/Chris Smith (USRA))

Many millions or billions of years ago, a gargantuan star in the Sagittarius constellation named J1808 ran out of fuel, collapsed under its own weight and exploded.

Blasts like this are common in the cosmos; scientists know they're part of a process that transforms mighty suns into shriveled neutron stars — the smallest and densest stars in the universe. What has astronomers intrigued about J1808 today, however, is the fact that it's still exploding, and apparently showering our galaxy with some of the most intense blasts of light ever detected.

On Aug. 20, 2019, a special neutron-star-watching telescope aboard the International Space Station (ISS) recorded a thermonuclear explosion on J1808 that blew all previously detected explosions away. The brief burst of X-ray light flickered for just 20 seconds, but released more energy in that time than Earth's sun releases in 10 days, according to a NASA news release. It was the single brightest flash of energy ever recorded by the telescope, which went online in 2017.

"This burst was outstanding," Peter Bult, an astrophysicist at NASA's Goddard Space Flight Center and lead author of a recent study on the explosion published in The Astrophysical Journal Letters, said in a statement. "We see a two-step change in brightness, which we think is caused by the ejection of separate layers from the [star's] surface, and other features that will help us decode the physics of these powerful events."

J1808 is a pulsar, or a neutron star that rotates extremely fast and emits powerful electromagnetic radiation from both of its pole. Stars like this spin so quickly (J1808 completes about 400 rotations every second) that the beams of energy at their poles appear to pulse like strobe lights every time they point toward Earth.

Similar to a black hole, the powerful gravity of a neutron star can steadily draw in huge amounts of surrounding matter that collect in a vast, swirling disk at the star's edge (this is called an "accretion disk"). According to the authors of the new study, J1808 appears to have spent a long time sucking in hydrogen gas from a mysterious celestial object that it shares a binary orbit with. This object, larger than a planet yet smaller than a star, earns the unflattering cosmological catch-all title "brown dwarf."

The massive explosion observed on Aug. 20 seems to be the result of a long, one-sided relationship between J1808 and its brown partner, the researchers wrote. The neutron star appears to have sucked up so much hydrogen from its neighbor over the past few years that the gas became a superhot, superdense "sea" that began to fall inward and coat the star's surface. Heat from the star warmed this sea so much that a nuclear reaction began to occur, causing hydrogen nuclei to fuse into helium nuclei. Over time, this newly formed helium created a second layer of gas around the star's surface that spanned several meters deep, the researchers wrote.

"Once the helium layer is a few meters deep, the conditions allow helium nuclei to fuse into carbon," study co-author Zaven Arzoumanian, also with NASA, said in the statement. "Then the helium erupts explosively and unleashes a thermonuclear fireball across the entire pulsar surface."

The researchers believe the Aug. 20 explosion occurred when such a fireball blew away both the hydrogen and helium layers surrounding the star in quick succession, causing a double flash of intensely bright X-ray energy to blast into space. (J1808 and its partner are located about 11,000 light-years from Earth, which is pretty close, cosmically speaking).

This interpretation of the explosion fits with the ISS observations, but leaves one important detail out. Following the first two spikes in X-ray energy, the pulsar released a third, slightly dimmer blast that was about 20% brighter than the star's normal flicker. It's not clear what sort of mechanism triggered this final blast of energy, the researchers said.