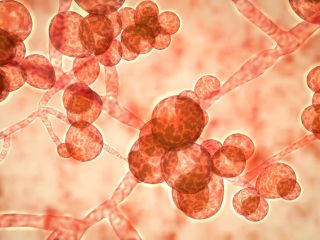 The Candida auris fungus has been called an "urgent threat" to public health.
(Image: © Shutterstock)

These microbes have built up resilience against the drugs designed to kill them, meaning they can be incredibly dangerous and difficult to treat. In fact, drug-resistant bacteria and fungi may pose a greater threat to American health than previous estimates suggested, according to a report released today (Nov. 13) by the Centers for Disease Control and Prevention (CDC).

A previous report, published in 2013, estimated that at least 2 million people in the U.S. get an antibiotic-resistant infection each year and that at least 23,000 people die from these infections. For the new report, CDC officials recrunched these numbers.

They found that closer to 2.6 million drug-resistant infections likely occurred at the time of the last report, resulting in nearly 44,000 deaths — nearly double the previous estimate.

"We knew and said [in 2013] that our estimate was conservative … and we were right," Michael Craig, a senior adviser for the CDC Antibiotic Resistance Coordination and Strategy Unit, said during a news conference today. Drawn from "millions and millions" of electronic records from 700 hospitals, along with other new data sources, the 2019 report provides a clearer picture of the danger that drug-resistant bugs pose to the nation's health and global security, Craig said.

But to put those numbers into perspective, someone in the U.S. catches a drug-resistant infection every 11 seconds, and someone dies as a result of these infections about every 15 minutes, according to a CDC statement.

A fungus called Candida auris is among the most dangerous of these microbes, the report noted. "It is a pathogen that we didn't even know about when we wrote our last report in 2013, and since then, it's circumvented the globe," Craig said. The fungus appeared to crop up on five continents, simultaneously, and kills 1 in 5 people who become infected with it, Redfield said. Some infections appear to be resistant to all three classes of  medications designed to treat it.

The bacterium Acinetobacter, also new to the "urgent threat" list, caused an estimated 8,500 infections in hospitalized patients and 700 estimated deaths in the U.S. in 2017, according to the CDC. Infections with this bacterium often arise in health care settings and appear resistant to multiple antibiotics, the report noted.

In addition, 223,900 cases of infection with Clostridioides difficile bacteria occurred in 2017 and claimed at least 12,800 lives. Though not typically antibiotic-resistant, these bacteria often infect people who are currently taking or have recently stopped taking antibiotics.

Drug-resistant gonorrhea infections are also on the rise, with most bacteria showing resistance to all but one class of antibiotics. Another resistant group of bugs, known as ESBL-producing Enterobacteriaceae (which includes E. coli), represents one of the leading causes of death among resistant infections and seriously complicate urinary tract infections in women. In addition, antibiotic-resistant infections with group A strep bacteria quadrupled since the 2013 report, and the death count will rise if serious measures aren't taken now, officials said.

"The good news is, we know how we can protect ourselves from this threat," Redfield said.

The noted decline in deaths from drug-resistant infections likely resulted from a number of nationwide initiatives to prevent the spread of germs, to contain emerging pathogenic threats, and to improve how doctors, patients and food producers use antibiotics. The CDC and the Food and Drug Administration also supply microbe samples to drug developers so they may design alternative treatments and better diagnostics for these pathogens.

Everyone can help prevent the spread of antibiotic resistance by taking antibiotics only as prescribed, Craig said. People can also help by maintaining good hygiene and washing their hands regularly, making sure to cook meat adequately and practicing safe sex (given that some antibiotic-resistant infections, such as gonorrhea, can be transmitted sexually).

In addition, Redfield encouraged people to make sure they're up to date on vaccinations, which reduces the rates of infection in general and thus can decrease antibiotic use in sick people. (Most antibiotic-resistant bacteria, with the exception of Streptococcus pneumoniae, do not yet have a specific vaccine to prevent the infection.)

"Bacteria and fungi will continue to develop resistance to drugs designed to kill them," Redfield said. "The report further underlines that this threat isn't going away."