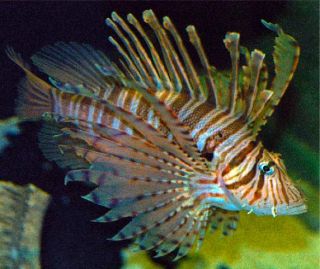 It's a good thing fish wouldn't survive long if loose on a plane. A new study finds there are more venomous fish than venomous snakes.

The 1,200 presumably venomous fish tallied in a new study is six times previous estimates. Fish with a biting bite outnumber all other venomous vertebrates combined, in fact.

"The results of this research were quite surprising," said researcher William Leo Smith of the American Museum of Natural History in New York City.

This might surprise you, too: More than 50,000 people are poisoned by fish bites every year, Smith and his colleague said. Symptoms range from blisters to death.

Smith conducted the study along with Ward Wheeler, Curator in the Museum’s Division of Invertebrate Zoology. The results are reported in the Journal of Heredity.

Where are they all?

There are also "plenty of venomous fishes" in the United States, but most are "not particularly harmful," Smith said. Exceptions include a few scorpionfishes in California and the Western Atlantic.

"However, there is always the possibility of introduced species being quite venomous," he said. "And, we have an example of this in the case of the lionfish/firefish, which became introduced in Florida, and now individuals can be collected at least as far north as Long Island in the fall."

Should swimmers worry? "For the most part, no," Smith said. "But people should always exercise caution when dealing with unfamiliar fishes or known venomous species."

The study could be important for the development of new drugs. Venoms pack proteins that can be used to develop drugs to treat a range of ails from allergies to pain and even cancer, the scientists say. While many creatures have been tapped for drug development, fish remain a relatively untapped resource.

Six treatments for stroke or cancer developed from snake venom are nearing FDA review, the scientists point out. Scorpion venom has been used in a brain cancer treatment.

The new list was developed through DNA studies and morphological analysis of spiny-rayed fishes.

A separate study last year found there could be more than 1,500 venomous lizards.