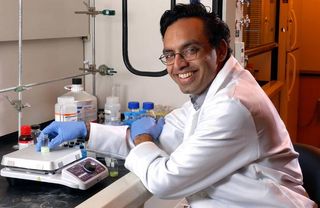 Editor's Note: ScienceLives is an occasional series that puts scientists under the microscope to find out what makes them tick. The series is a cooperation between the National Science Foundation and LiveScience.

Biomedical engineer Niren Murthy of the Georgia Institute of Technology helps design cutting-edge chemicals for the detection and treatment of diseases. In a study published late last year, Murthy and his colleagues revealed a new family of fluorescent chemical dyes called hydrocyanines that can be used as probes to detect and measure the presence of highly reactive metabolites of oxygen that are associated with a variety of inflammatory diseases, including cancer and atherosclerosis.  The dyes could be used at an early stage of disease, improving hopes for treatment.  Read more here.  That study followed on the heels of another that presented a family of biodegradable polymers called polyketals, which could improve treatment for such inflammatory illnesses as acute lung injury, acute liver failure and inflammatory bowel disease by delivering drugs, proteins and snips of ribonucleic acid to disease locations in the body. More on that study is available here. Below, Murthy answers the ScienceLives 10 Questions.

What inspired you to choose this field of study?   It seemed to have unlimited potential.  It was very new.

What is the best piece of advice you ever received?   Professor Rick Cornez at the University of Redlands advised me to switch my major from political science to biomedical engineering.

What was your first scientific experiment as a child? I don’t remember.

What is your favorite thing about being a scientist or researcher? Freedom to explore new ideas.

What is the most important characteristic a scientist must demonstrate in order to be an effective scientist? Creativity.

What are the societal benefits of your research?   Improved healthcare.

Who has had the most influence on your thinking as a researcher? Impossible to limit it to one person.

What about your field or being a scientist do you think would surprise people the most? I don’t really know.

If you could only rescue one thing from your burning office or lab, what would it be?   Nothing, it is all available online and stored in my emails.

What music do you play most often in your lab or car? NPR