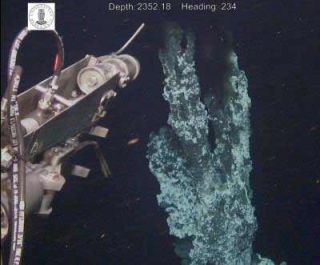 The top three feet of a chimney nearly 40 feet tall are visible as the arm of a remotely operated vehicle reaches in to sample fluids. The vent is part of the northernmost hydrothermal vent field yet seen and sampled.
(Image: © Center for Geobiology/U. of Bergen)

Many miles inside the Arctic Circle, scientists have found elusive vents of scalding liquid rising out of the seafloor at temperatures that are more than twice the boiling point of water.

The cluster of five hydrothermal vents, also called black smokers, were discovered farther north than any others previously identified. The vents, one of which towers four stories high, are located on the Mid-Atlantic Ridge between Greenland and Norway, more than 120 miles farther north than other known vents.

Remotely operated vehicles photographed the scene as part of an expedition led by Rolf Pedersen, a geologist at the University of Bergen in Norway.

Black smokers have been found in many deep-sea locations, including on the Juan de Fuca Ridge off Washington and British Columbia. Despite the lack of sunlight to power life in the abyss, the vents often support unique communities of creatures that live off their warmth and chemicals. Some scientists think the vents would have been great locales for the origin of life on Earth.

Dissolved sulfide minerals that solidify when vent water hits the icy cold of the deep sea have, over the years, accumulated around the newfound vent field in what is one of the most massive such deposits ever found on the seafloor, said expedition member Marvin Lilley, a University of Washington oceanographer.

The vents are created where the seafloor spreads apart. The farther north one goes along the ridge, the slower the spreading is.

The active chimneys in the new field are mostly black and covered with white mats of bacteria feasting on the minerals emitted by the vents. Older chimneys are mottled red as a result of iron oxidization. All are the result of seawater seeping into the seafloor, coming near fiery magma and picking up heat and minerals until the water vents back into the ocean.

The whole deposit is about 825 feet in diameter at its base and about 300 feet across on the top and might turn out to be the largest such deposit seen on the seafloor, Lilley said.

"Given the massive sulfide deposit, the vent field must surely have been active for many thousands of years," he said.

The field has been named Loki's Castle partly because the small chimneys at the site looked like a fantasy castle to the scientists. The Loki part refers to a Norwegian god renowned for trickery.

The area around the vents was alive with microorganisms and animals. Preliminary observations suggest that the ecosystem around these Arctic vents is diverse and appears to be unique, unlike the vent communities observed elsewhere, according to a statement from the University of Bergen.