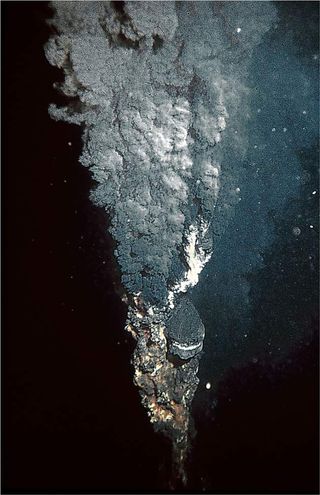 A hydrothermal vent similar to the one at which the new bacteria were found.
(Image: © ASU)

Scientists have discovered the first organism known to rely on photosynthesis in a place where the sun never shines.

The creature lives well more than a mile under the sea and captures dim radiation coming from hydrothermal vents.

The green sulfur-loving bacteria were found off the coast of Mexico. They use sulfur and the faint light to produce energy and are yet another "extremophile" found on Earth that suggests the sort of strange biology that might populate other planets, scientists said.

Other microbes have endured more than 30,000 years of frozen, suspended animation. Some eat hydrogen and live inside Earth. Still others do just fine in hot or acidic conditions.

"This is startling in the sense that you do not expect to find photosynthesis in a region of the world that is so completely dark," Blankenship said.

The discovery, led by J. Thomas Beatty of the University of British Columbia, was detailed this week in the Proceedings of the National Academy of Sciences.

Other creatures that live without sunlight rely on other chemical conversions to produce life-giving energy. Sunlight penetrates only about the distance of one or two football fields below the surface of the sea, the scientists said.

The newfound bacteria use sophisticated antenna systems that act like a microscopic satellite dish to collect light, the researchers said. Tests show the microbes indeed depend on photosynthesis. Visible light is just one aspect of the electromagnetic spectrum, which includes radio waves, infrared "heat," and X-rays. Instead of sunlight, the deep-sea microbes use geothermal radiation.

"This shows that photosynthesis is something that is not limited only to the very surface of our planet," Blankenship said. "It lets you consider other places where you might find photosynthesis on Earth as well as on other planets."

Scientists have long considered Jupiter's moon Europa as a world where life might exist in a liquid sea beneath a frozen shell, supported by hydrothermal vents rather than sunlight.

Hydrothermal vents on Earth have been known for years to support rich colonies of microbes and higher life forms. Some research suggests they may have been the points of origin for life on this planet.

"Life is much stronger than what we realized," Blankenship said.