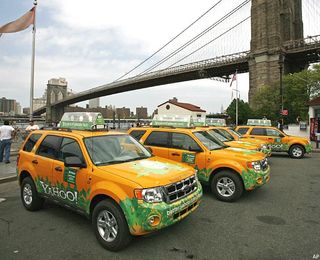 NEW YORK — The fleet of yellow taxicabs in New York City will go entirely hybrid within five years, Mayor Michael Bloomberg announced Tuesday. “There's an awful lot of taxicabs on the streets of New York City,” Bloomberg said. “These cars just sit there in traffic sometimes, belching fumes. “This does a lot less. It's a lot better for all of us,” he said of the hybrid plan. Nearly 400 fuel-efficient hybrids have been tested in the city's taxi fleet over the past 18 months, with models including the Toyota Prius, the Toyota Highlander Hybrid, the Lexus RX 400h and the Ford Escape. Under Bloomberg's plan, that number will increase to 1,000 by October 2008, then will grow by about 20 percent each year until 2012, when every yellow cab — currently numbering 13,000 — will be a hybrid. Hybrid vehicles run on a combination of gasoline and electricity, emitting less exhaust and achieving higher gas mileage per gallon. The standard yellow cab vehicle, the Ford Crown Victoria, gets 14 miles per gallon (6 kilometers per liter) . In contrast, the Ford Escape taxis get 36 miles per gallon (15 kilometers per liter). In addition to making the yellow cab brigade entirely green within five years, the city will require all new vehicles entering the fleet after October 2008 to achieve a minimum of 25 miles per gallon (10 kilometers per liter). A year later, all new vehicles must get 30 miles per gallon (13 kilometers per liter) and be hybrid. Bloomberg made the announcement on NBC's “Today” show. “New York City's 13,000 taxi cabs will still be yellow on the outside, but soon they will be green on the inside,” said Councilman David Yassky, who has led the green taxi campaign in the City Council.

Hybrid vehicles are typically more expensive, but the city said the increase in fuel efficiency will save taxi operators more than $10,000 (euro7,433) per year. Yahoo Inc. said it would donate 10 hybrid Ford Escapes for the city's effort. Shifting the taxi fleet to hybrids is part of Bloomberg's wider sustainability plan for the city, which includes a goal of a 30 percent reduction in carbon emissions by 2030. Part of the plan could include congestion pricing for drivers entering some of the busiest parts of Manhattan. Turning over the taxi fleet by 2012 is not an impossible goal. The life of a New York City taxi is typically about three to five years; the city's Taxi and Limousine Commission requires all vehicles to be retired within a certain time frame. Fernando Mateo, president of the New York State Federation of Taxi Drivers, an advocacy trade group, applauded the city's effort to go green. “In the short term, they're going to have to spend more money, but in the long run they will save money,” he said. “We support getting more hybrids on the road.” The government does not own the city's yellow cabs, but sells licenses to individual drivers and operators, who must purchase their own vehicles that meet the specifications of the Taxi and Limousine Commission. The agency serves as the regulating and licensing authority for all vehicles per hire in the city.