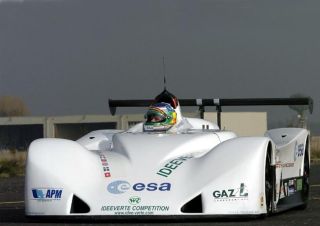 A racecar, developed by IdÃ©eVerte CompÃ©tition, has broken the speed record for a car running on liquefied petroleum gas.
(Image: © ESA)

The idea that an environmentally friendly automobile has to be small and timid may change as a space-age prototype reaches 196 mph (315 km/h), setting a new record for this type of vehicle.

"The racing track is the ultimate laboratory and also a fantastic place to display the 'green' car technology to come," said Alain Lebrun, the president of the Id?eVerte Comp?tition, which developed the new automobile.

Emissions from cars running on LPG, which is primarily propane, are far less than those from traditional petroleum-burning cars. LPG is extracted from natural gas or from refinery processes. It is a gas at room temperature, but can be kept in a liquid state in high-pressure tanks.

The fuel is highly flammable, so one of the challenges of making the Id?eVerte racecar was to make it safe. For this, engineers turned to advanced technologies from the European Space Agency.

The primary exhaust system of the racecar is at 1,800 degrees Fahrenheit (1,000 degrees Celsius). Special insulation - using materials from the European Ariane rocket, which ferries satellites into space - was wrapped around the exhaust to prevent the engine from overheating and to reduce the risk of igniting a gas leak.

If the car should catch on fire, a heat shield from the Ariane's rocket engines protects the car's gas tank, thereby increasing the time from five minutes to 45 minutes before the tank's safety valve pops open due to the heat. This extra time will be important during rescue efforts.

There are also three fire extinguishers on the car that turn on automatically, as well as manually. The extinguishers come from Russian rocket launchers and are similar to the devices that deploy airbags in normal commercial automobiles.