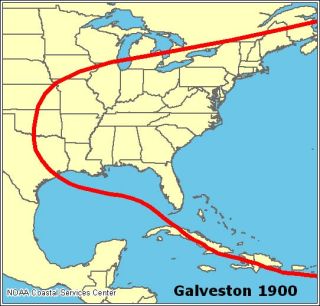 The path of the 1900 storm that struck Galveston, TX.

Texas, the most likely destination for Rita, is second only to Florida in direct hurricane hits since 1900.

The National Hurricane Center predicts Rita will strenghten to a dangerous Category 3 storm with winds of at least 111 mph and will come ashore late Friday or early Saturday. Galveston, TX is near the centerline of the forecast window.

The deadliest hurricane ever to strike the United States hit Galveston more than a century ago.

Storm surges of 8 to 15 feet swamped the entire Galveston Island and inundated other parts of the nearby Texas coast, according to the National Hurricane Center. Most of the deaths were due to the surge.

Half the homes on Galveston Island were swept away, according to NOAA, the hurricane center's parent organization.

In the entire Atlantic Basin, only an October 1780 hurricane that killed 20,000 or so on Caribbean islands was deadlier.

The track of the 1900 storm was similar to the predicted path of Hurricane Rita. But forecasters stress that it is not possible to say exactly where Rita will strike.

Things were different back then. There were no satellites, of course, and no radar. Weather forecasts were less accurate.

But warnings were issued by what was then known as the Weather Bureau. The real problem, according to a NOAA analysis: "Many didn't heed the warnings, preferring instead to watch the huge waves."

The following account of the water's rapid rise comes from Isaac M. Cline, the senior Weather Bureau employee in Galveston at the time:

"By 8 p.m. a number of houses had drifted up and lodged to the east and southeast of my residence, and these with the force of the waves acted as a battering ram against which it was impossible for any building to stand for any length of time, and at 8:30 p.m. my residence went down with about fifty persons who had sought it for safety, and all but eighteen were hurled into eternity. Among the lost was my wife, who never rose above the water after the wreck of the building. I was nearly drowned and became unconscious, but recovered through being crushed by timbers and found myself clinging to my youngest child, who had gone down with myself and wife."

Cline floated with small group of other people for three hours until the water began to drop.

"We landed about 11:30 p.m., by climbing over floating debris to a residence on Twenty-eighth street and Avenue P," he wrote.

The science of monster storms.