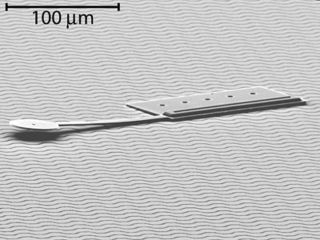 The microrobot is the smallest untethered and controllable robot ever.
(Image: © Donald Laboratory.)

Researchers have built an inchworm-like robot so small you need a microscope just to see it.

In fact about 200 hundred of them could line up and do the conga across a plain M&M.

The tiny bot measures about 60 micrometers wide (about the width of a human hair) by 250 micrometers long, making it the smallest untethered, controllable microrobot ever.

"It's tens of times smaller in length, and thousands of times smaller in mass than previous untethered microrobots that are controllable," said designer Bruce Donald of Dartmouth University. "When we say ‘controllable,' it means it's like a car; you can steer it anywhere on a flat surface, and drive it wherever you want to go. It doesn't drive on wheels, but crawls like a silicon inchworm, making tens of thousands of 10-nanometer steps every second. It turns by putting a silicon 'foot' out and pivoting like a motorcyclist skidding around a tight turn."

Because it makes use of this innovative bending movement and is untethered, it can move freely across a surface without the wires or rails that restricted the mobility of previously developed microrobots. The caterpillar strategy also helped the researchers avoid a common problem in microrobotics.

"Machines this small tend to stick to everything they touch, the way sand sticks to your feet after a day at the beach," said Craig McGray of the National Institute of Standards and Technology. "So we built these microrobots without any wheels or hinged joints, which must slide smoothly on their bearings. Instead, these robots move by bending their bodies like caterpillars. At very small scales, this machine is surprisingly fast."

To get around, the robot makes use of two independent microactuators – the robot's "muscles." One is for forward motion and the other for turning.

It doesn't have pre-programmed directions. Instead, it reacts to electric changes in the grid of electrodes it moves on. This grid also supplies the microrobot with the power needed to make these movements.

This microrobot and similar versions that could be developed might eventually ensure information security, inspect and make repairs to integrated circuits, explore hazardous environments, or even manipulate human cells or tissues.

This research will be presented in October at the International Symposium of Robotics Research in San Francisco. It will also be detailed in an upcoming issue of the Journal of Microelectrochemical Systems.