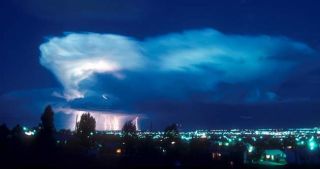 The new forecast technique could provide better forecasts of severe storms like this one north of Boulder, Colorado.
(Image: © NCAR)

A project at the National Center for Atmospheric Research (NCAR) measures changes in the speed of radar signals caused by refraction of the signal off moisture. If the technique proves successful, scientists said today, it could be added in the next few years to the national network of Doppler radars.

Regular Doppler radar spots raindrops or hailstones, but not the moisture that leads to precipitation.

The new setup can detect strong contrasts in moisture, a scenario that can spawn intense storms.

"Nobody's ever seen such high-resolution data on moisture before," said NCAR scientist Rita Roberts, who heads the project. "We believe this could greatly help forecasters predict where heavy rains might develop."

The method could "help forecasters pin down the locations and timing of storms that might rage a few minutes to a few hours later," according to an NCAR statement.

The project is named REFRACTT (Refractivity Experiment For H2O Research And Collaborative operational Technology Transfer). It is being tested now through Aug. 11 in Denver.

"Low-level moisture is the key to our weather here, especially during the summertime," said Larry Mooney, meteorologist in charge at the Denver office of the National Weather Service. "We're really excited about the REFRACTT data."

Along with four overlapping radar stations, REFRACTT relies on computer models, satellites and weather balloons. It's funded by the National Science Foundation and is the brainchild of Frederic Fabry of McGill University.