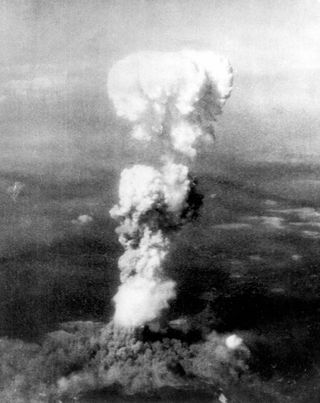 At the time this photo was taken, smoke billowed 20,000 feet above Hiroshima while smoke from the burst of the first atomic bomb had spread over 10,000 feet on the target at the base of the rising column. August 5, 1945. Two planes of the 509th Composite Group, part of the 313th Wing of the 20th Air Force, participated in this mission; one to carry the bomb, and the other to act as escort.
(Image: © U.S. Air Force photo)

The site of the worst nuclear accident in history will be a new tourist attraction, the Ukranian government announced Monday (Dec. 13). The area around Chernobyl is scheduled to open to visitors next year.

Where tourists are allowed to go, how long they may stay, and what they eat will be carefully controlled, government officials say, so the radiation risks are "negligible."

"They will be properly channeled at all times," said Vadim Chumak at the Research Center for Radiation Medicine of Ukraine.

Scientists researching the effects of Chernobyl at the U.S. National Cancer Institute declined comment, deferring to Chumak, but an unaffiliated biologist pointed out that many other adventurous vacations (think a steep mountain climb) are not risk-free, either.

A nuclear reactor exploded at Chernobyl in Ukraine in 1986. The blast knocked the 2,000-ton lid off the reactor and spewed out 400 times more radioactive fallout than the Hiroshima bomb, contaminating more than 77,000 square miles (200,000 square kilometers) of Europe. Roughly 600,000 people were exposed to high doses of radiation. [Top 10 Greatest Explosions Ever]

The exclusion zone around Chernobyl — the highly contaminated area covering a radius of 19 miles (30 km) around the doomed reactor — will be open to visitors next year.

"The visits of tourists would be strictly controlled, so that the radiation risks would be negligible," Chumak, who heads the Ukraine research center’s laboratory of external exposure dosimetry, told LiveScience.

After the disaster, it was uncertain how contaminated the surroundings were, and in a hurry, the authorities declared an arbitrary distance from the reactor off-limits. Researchers later found that some areas within the exclusion zone contained only low levels of radiation. Also, radioactive material decays over time, and some of it disappeared soon after the explosion.

Still, other areas of the exclusion zone, such as the radioactive-waste disposal sites, the sarcophagus entombing the remains of the damaged reactor, and the Red Forest where much of the radioactive material from the reactor spewed, are still hazards. Radioactive cesium, strontium and plutonium are also still around. Plutonium in particular is expected to linger; it takes thousands of years to decay.

"However, the visits of the tourists would be strictly monitored so that they would not have access to locations with relatively high radiation levels," Chumak said. "The visitors would be safe from the radiation point of view, as they would not be free to go wherever they want.”

Ecologist and evolutionary biologist Anders Moller at the University of Paris-Sud in France said he has spent one to three weeks in the exclusion zone every year for the last two decades, to assess the effects of radiation on animals, plants and people there.

"The level of background radiation I experience during such visits amounts to something like that from an X-ray at a doctor's office," Moller said. "But there is extreme variation in how 'hot' different spots are. There is a more than a factor-of-10,000 difference between the cleanest and the hottest areas in the exclusion zone."

The biggest danger for all life in that area, Moller said, would come from consuming anything that contained radioactive material. "It might end up in your gut and cause serious problems," he explained.

"I don't eat the local produce. The people that live in this contaminated area don't have this luxury, and live from what they grow in their gardens. I've seen with my own eyes with a Geiger counter that locally grown potatoes and onions and so on are often contaminated."

Tourists will not be given any food from the area, "and no airborne radioactivity — dust or aerosols — will be present in the areas visited by tourists," Chumak said. (People who work at Chernobyl must wear respirators where there is a risk of radioactive particles in the air, and they change into and out of special clothing. They are sometimes also given more-protective suits and masks.)

A limited amount of tourism to Chernobyl is already being tolerated, and given the new Ukrainian administration's increased emphasis on economic development, opening Chernobyl for tourism could pay off. For instance, Chumak said, soccer fans attending the European Cup in 2012, to be held in Ukraine and Poland, might be interested in making side trips to Chernobyl.

So what is there for visitors to see? Stopovers would include Chernobyl town, "where the level of man-made radiation is small in comparison to the natural radiation background," Chumak said. (The world is normally bathed in a low level of radiation.)

There is also a special viewing terrace that looks upon the sarcophagus. "The closer you get to the sarcophagus, the higher the external radiation, thus justifying the use of a location far enough from the sarcophagus to limit the exposure to a level about two to three times the natural background," Chumak said.

Tourists also could go close to the power plant and "see and feed large catfishes from the nuclear power plant cooling pond."

One could also visit the town of Pripyat, "which had been evacuated the day following the accident," Chumak added. "The radiation levels there are relatively high, but due to limited stay time, cumulative doses are kept very low." If they made return trips, tourists would be given personal dosimeters to measure their radiation levels, Chumak said.

Moller called the exclusion zone "a ghostly place. It is peculiar in many ways. There are all these villages that have been permanently evacuated, and you can see and hear many fewer birds and other signs of nature."

"It's a kind of reverse ecotourism," said biologist Tim Mousseau at the University of South Carolina at Columbia. "It could prove useful for educating people about the potential consequences of accidents related to nuclear energy, and I think any kind of increased awareness there is good.

"As long as people are informed that it's not completely risk-free, I don't see any problem with it. When people try and climb Mount Everest, they know hundreds of people have died trying, and they still do it."

However, Moller added, "I'm not sure this is where I would go for my honeymoon."