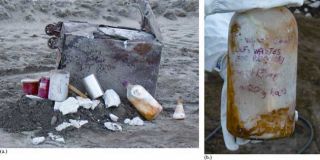 Scientists have found the oldest known sample of reactor-produced bomb-grade plutonium, a relic in a bottle that dates back to 1944 and the infancy of the U.S. nuclear weapons program.

The manufactured material was found in 2004 in a bottle at a waste burial trench at the Hanford nuclear site in Washington state, which was the location for U.S. plutonium production during World War II. But until now, nobody knew the plutonium's origin.

The technique used to figure that out is part of a relatively new field called nuclear archaeology, aimed at thwarting the smuggling of bomb-grade nuclear material.

"The frequency of smuggling events involving radioactive materials is supply driven and is on the rise world-wide," the researchers write in the journal Analytical Chemistry, a publication of the American Chemical Society.

The Hanford site was the first for U.S. plutonium production for nuclear weapons and now the focus of a massive environmental cleanup effort due to high levels of radioactive waste that remain at the site. Material produced at this site was used in Trinity, the world's first test of a nuclear weapon on July 16, 1945, and in the nuclear bomb dropped on Nagasaki, Japan, on Aug. 10, 1945.

Jon Schwantes and colleagues at the Pacific Northwest National Laboratory looked at multiple pairs of uranium isotopes known as "parent" plutonium and "daughter" isotopes. They examined what's known as the chemical fractionation of the material to determine its age, give or take a few years.

The plutonium in the sample had been separated from uranium and fission products in 1944, the scientists conclude, making it the oldest known sample of bomb-grade plutonium produced in a reactor. The only older known samples of Pu-239 were produced by the late Glenn Seaborg and his associates in the beginning of the 1940's when the existence of the element was first confirmed and characterized.

The scientists were able to determine the material came from the Clinton reactor in Oak Ridge, Tenn., by comparing the chemical structures, along with historical documents tracking the material's movement from Oak Ridge to Hanford.

"Aside from the historical significance of this find, this work provides the public a rare glimpse at a real-world example of the science behind and power of modern-day nuclear forensics," the scientists write.