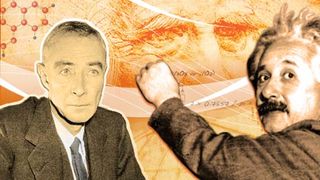 He's certainly got the mad scientist hair thing down. One of the last century's most celebrated scientists, Albert Einstein turned physics on its head with his theories of relativity, and made enormous contributions to the fields of gravitation and quantum theory. He also liked to take his sailboat out on the water on windless days, "just for the challenge."

Between painting the most revered masterpieces of Renaissance art, Leonardo da Vinci somehow still found time to tap into his inner eccentric. The Italian's scientific sketchbooks, most written in mirror-image cursive, are a fantasyland of oddball machines and brilliant designs, many which would never come to fruition and some that would be built many centuries later, like his rudimentary helicopter.

This is the guy you picture pulling down a giant electric switch in a shower of fiery sparks. Tesla, who is credited with the invention of the wireless radio and the AC generator that kick-started the electrical age was even born, fittingly, during a violent lightning storm in 1856. He was also known as a manic genius that slept little and loved to put on a good show, often using his own body as a conductor in public demonstrations.

This modern environmental scientist and inventor of the world-as-superorganism Gaia Hypothesis has been dispensing dire predictions about climate change and our world for decades now, many of which have come true. He's not shy about spreading one ultra-gloomy forecast; given the current ecological crisis, a massive die-off of about 80 percent of humans by 2100 is inevitable, he believes.

When Jack Parsons wasn't busy co-founding the Jet Propulsion Laboratory, he was practicing magic and calling himself the Antichrist. This mysterious bad boy of the space program had no formal education, yet still managed to develop a rocket fuel that would guide the United States through WWII and into space. Tragically yet appropriately dramatic, Parsons blew himself up during a lab experiment at his home in 1952.

Part of the Manhattan Project's team of geniuses that developed the atomic bomb, physicist Richard Feynman went on to become one of the most important scientists of the late 20th century. Far from the stuffy professor type, this free spirit explored music and nature, decoded Mayan hieroglyphics and picked locks in his spare time.

Respected nuclear physicist and prolific writer Freeman Dyson moonlights as a science fiction writer's dream. In 1960, he touted the idea that in the future humans may need to construct an artificial shell, now called the Dyson Sphere, that would encircle the entire solar system and make maximum use of the sun's energy. Dyson wholeheartedly believes in extraterrestrial life and thinks we'll make contact within the next few decades.

The Manhattan Project's head honcho was never reserved about his sympathies for socialism and his conflicted feelings over dropping the atomic bombs, and was ultimately stripped of his academic and political power for it. Despite those controversies, he's also remembered as a man his grad students called "Oppie," who learned Dutch and Sanskrit just because, and quoted a Hindu holy text at the sight of the first atomic bomb test.

At the age of 12, an intrepid Wernher von Braun loaded his toy wagon with some firecrackers and shot off across a crowded German street. It was a sign of things to come. The brains behind Hitler's V-2 rocket program arrived in the United States as a prisoner of war and went on to be its champion of space and lunar exploration. While putting people on the moon, von Braun also mastered scuba diving and philosophy.

Born and raised in Germany's Castle Frankenstein, 17th-century alchemist Johann Dippel became noted as the inventor of Prussian Blue, one of the first synthetic chemical dyes, but most famous for his endless quest for elixirs of immortality. Rumors of his experiments on human corpses may have inspired Mary Shelley's legendary character that bore the castle's name.