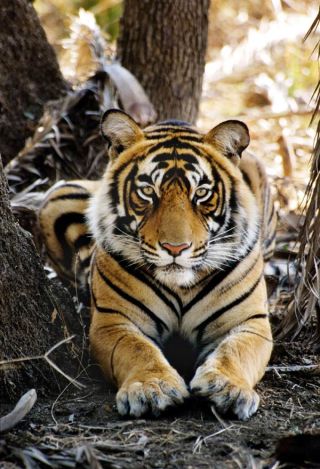 Tigers are quickly disappearing, with just over 3,000 still living in the wild.
(Image: © Vivek R. Sinha/WWF-Canon.)

In just a few days, the tiger will be center stage in St. Petersburg, Russia, as government leaders, advocacy groups and donor states from around the world gather for a meeting that is likely the first of its kind — a forum that may decide the ultimate fate of a single species.

Next week's Tiger Summit, hosted by Russian Prime Minister Vladimir Putin, is the culmination of a two-year effort, initiated by the World Bank in 2008, to organize a workable global strategy to save the tiger, a species that is being hustled to the brink of extinction.

A century ago, 100,000 tigers roamed forests across vast swaths of southeast Asia. According to recent estimates, fewer than 3,200 tigers remain in the wild today, a drop of around 97 percent. Of the nine recognized subspecies, three are extinct and one is considered to be functionally extinct in the wild. [See all nine tiger subspecies.]

And, despite increasing worldwide attention to the plight of the big cats, tiger populations continue to decline in the 13 remaining countries where the animals still live in the wild.

"We're in a very dire situation for tigers, so this summit couldn't have come at a more pivotal time," said WWF's Mike Baltzer, head of the international conservation organization's Tigers Alive Initiative.

However, there is hope on the horizon, Baltzer said during a media telephone briefing this morning (Nov. 16).

"The good news is that our experience in tiger conservation means we do know what it takes to save tigers, but the thing we've been missing is the high level engagement of government officials, and the financing," Baltzer said.

He and other conservationists hope the Tiger Summit will help bring those missing pieces into the puzzle to bring the tigers back from the brink.

Although political will has been lacking within the tiger range countries — the 13 Asian countries where tigers still live — it is the economics of the tiger problem that has pushed the iconic cats closer to oblivion in recent years.

Tigers can mean big money for the criminals who kill the animals for sale on a thriving global black market in tigers and tiger parts. In the last decade, the remains of between 100 and 120 tigers have been seized by authorities in tiger range countries each year, according to a new report from TRAFFIC, an international trade monitoring organization.

"These are recorded seizures, and the true figure is certainly much higher," said TRAFFIC's Sabri Zain, during today's WWF media briefing.

"A big challenge is to somehow make a live tiger worth more than a dead tiger," said Fred Bagley, a wildlife biologist with the U.S. Fish and Wildlife Service (FWS) who will be attending the upcoming Tiger Summit.

Bagley is the lone member of the FWS slated to attend the conference, but the United States is sending several additional representatives from the State Department, the Department of Justice and USAID.

The United States is the only government in the world with an active fund dedicated to tiger conservation. Congress passed the Rhinoceros and Tiger Conservation Act in 1994, and Bagley told OurAmazingPlanet that the fund provides grants for tiger protection efforts around the world, supplying everything from radios, bicycles and GPS units to patrols working in protected areas, to providing training for rangers and managers.

In 2010, the fund dispensed $1.9 million to 36 different tiger conservation projects, Bagley said, but warned that, given the current political climate, that number could certainly change.

"Congress decides every year what they're going to put in, and it could go either direction," Bagley said. "I think that we have to be concerned about whether there will be adequate spending."

Steven Sanderson, president and CEO of the Wildlife Conservation Society (WCS) in New York, said that finding the money to finance tiger protection efforts is a matter of society's priorities.

The WCS recently produced a report that examined the few dozen areas around the world where wild tigers can still reproduce. Only about 1,000 breeding females remain in the wild, and the report suggested that with an additional $35 million a year for the next decade or so, breeding females could thrive, and wild tiger populations could bounce back.

"This is what an athlete gets paid every year, so if we can't afford to pay that money to save tigers as a society, that just says something, doesn't it?" Sanderson told OurAmazingPlanet.

The tiger summit begins on Nov. 21 and wraps up Nov. 24. WWF's Mike Baltzer said the governments of all 13 tiger range countries have already agreed on many key strategies for saving the tiger, and all that remains is to get solid commitments from policymakers.

"But ultimately they're held back by the level of funds they have available to do it," Baltzer said. "We're hoping that the donors will begin to step up."