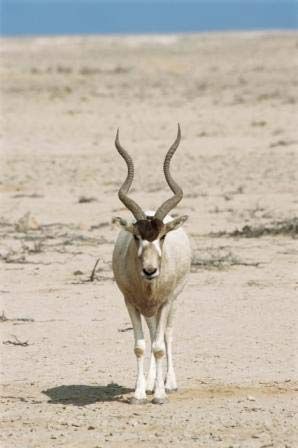 Valued for its meat and leather, the addax has declined due to uncontrolled hunting.
(Image: © Mike Potts/naturepl.com)

The Wildlife Conservation Society has released a list of the "Rarest of the Rare," a dozen animals most in danger of extinction.

The eclectic list includes birds, mammals, fish, reptiles, amphibians, and insects. Some are well known, such as the northern right whale and Sumatran rhino, while others are more obscure, including Abbot's booby, an ocean-going bird that only nests on Christmas Island.

The animals were highlighted today because it is National Endangered Species Day. They are:

Threats to each species vary widely. In the case of Abbot’s booby, the introduction of yellow crazy ants to Easter Island has severely altered their nesting habitat. Meanwhile, the addax has been severely impacted by desertification of its habitat and overhunting. Other species suffer from diseases, as in the case of the golden arrow poison frog, or poaching for the Chinese medicinal trade, which has reduced the population of Sumatran rhinos to fewer than 300 individuals.

"'Rarest of the Rare' is a snapshot of just a handful of the most critically endangered species that serves to illustrate their plight and inspire the public to join the fight for their continued survival," said Kent Redford, director of the Wildlife Conservation Society Institute.