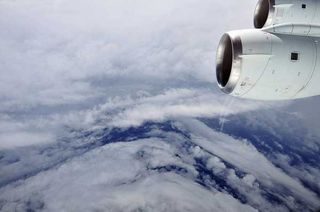 The eye of Hurricane Earl was clearly visible during NASA's flight through the storm on Monday.
(Image: © NASA/Jane Peterson.)

Hurricane hunters crammed aboard a NASA DC-8 jetliner packed tight with a multitude of complicated instruments spent their Monday in a spot few probably envy: flying through the eye of Hurricane Earl. Repeatedly.

The DC-8 made at least six passes through the heart of the storm that day. The aircraft, a type of commercial passenger jet that has been specially outfitted for scientific purposes, is the largest of NASA's fleet of planes heading into tropical cyclones this hurricane season.

"You definitely feel it, it's bumpy," said Scott Braun, one of the mission scientists, "but it really wasn't that bad. And once we got into the eye, the views were pretty spectacular." [See the eye of Hurricane Earl.]

Braun, a research meteorologist at NASA's Goddard Space Flight Center in Greenbelt, Md., told OurAmazingPlanet that at 38,000 feet (11,582 meters), Monday's flight was beyond the reach of Hurricane Earl's roughest winds.

Although its strength has waned, Earl is still a powerful Category 3 storm, packing maximum sustained winds of about 125 mph (200 kph), according to the most recent update from the National Hurricane Center. Warnings have been issued, and officials up and down the United States' Atlantic coastline are keeping a close eye on the storm, which could hit North Carolina by Friday morning.

NASA's airborne assault on Earl and other storm systems is a part of the Genesis and Rapid Intensification Processes mission, or GRIP experiment, a field study aimed at helping scientists better understand the mechanism behind swift changes in a storm's strength. The National Oceanic and Atmospheric Administration (NOAA) and the Air Force are also sending aircraft through storms this year.

Scientists from government agencies have taken reams of data on Hurricane Earl from the time of its birth over tropical Atlantic waters, and will continue to do so as it slowly dies on its path northward over cooler oceans.

NASA's DC-8 will take off around noon on Wednesday for another trip into the storm's interior, this time to focus on the mechanisms that cause a storm system to weaken, Braun said.

And by tomorrow, Thursday, the DC-8 will have plenty of company inside Hurricane Earl.

The Global Hawk, an unmanned drone, is taking off at 9 p.m. local time tonight from its base in California, and will fly along the southern U.S. border, arriving at Hurricane Earl by early tomorrow morning. The aircraft will spend eight or nine hours inside the storm before heading home.

In addition, NASA's WB-57 aircraft will conduct its first data-taking flight of the mission, armed with a brand new instrument capable of scanning the storm's winds in swaths up to 25 miles (40 km) across, a marked improvement over current hurricane-hunting instruments that measure winds only directly below a plane.

NASA's aircraft will be joined by NOAA and possibly even some Air Force planes, meaning at least five, and maybe more, aircraft could be flying Hurricane Earl tomorrow.

Braun said that Hurricane Earl's life cycle may turn out to be the most thoroughly documented in history. "So that's pretty exciting," he said.

Agency scientists are also keeping an eye on a weather disturbance that is still far out in the Atlantic. If the system continues to develop, it may provide more valuable observing time for the GRIP mission. And if the distant weather system strengthens into a tropical storm, officials already have a name picked out: Gaston.