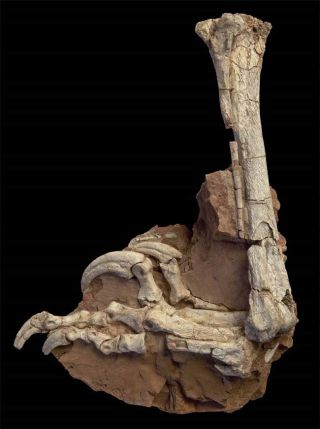 The fossilized hind limb of Balaur bondoc shows the double-sickle claws of the foot, one of 20 unique features found on the animal, which lived on a Late Cretaceous island in what is now Europe.
(Image: © Mick Ellison.)

A deadly, heavier relative of Velociraptor, which had twice as many giant sickle-like claws on its feet and was more of a kickboxer than its famous sprinter-like cousin, has been discovered in Romania.

A partial skeleton of the predator, dubbed Balaur bondoc — "Balaur" from an archaic Romanian term for dragon, "bondoc" meaning stocky — was unearthed last year by Mátyás Vremir, a geologist at the Transylvanian Museum Society.

Fragmentary remains of this 6- to- 7-foot-long (1.8 to 2.1 meters) carnivore had been known for more than 10 years, but until now "we didn't have any idea where to fit them," explained researcher Zoltán Csiki, a paleontologist at the University of Bucharest.

Back when Balaur  lived — between 72 million and 65 million years ago, near the end of the Cretaceous Period — much of present-day Europe was awash in higher seas, and Romania was part of an island archipelago.

"It is one of the most unusual and strangest dinosaurs I've had the privilege of working on in my entire career," researcher Mark Norell, chairman of paleontology at the American Museum of Natural History, told LiveScience.

This new carnivore had more than 20 features not shared by its nearest relatives. For instance, in addition to a large claw on its second toe, which was typical of this group of dinosaurs, Balaur had a large claw on its big toe that could be hyper-extended, presumably to slash prey. Its hips possessed enormous muscle attachment areas, suggesting it was adapted for strength over speed. It also had shorter, stockier legs and feet.

In addition, its hands were atrophied and some of the hand bones were fused together, making grasping difficult. This suggests, along with its leg and foot traits, that Balaur relied on its hind limbs to grasp and disembowel prey.

"Balaur is a new breed of predatory dinosaur, very different from anything we have ever known," said researcher Stephen Brusatte, a graduate student at Columbia University, affiliated with the American Museum of Natural History. "Its anatomy shows that it probably hunted in a different way than its less stocky relatives. Compared to Velociraptor, Balaur was probably more of a kickboxer than a sprinter, and it might have been able to take down larger animals than itself, as many carnivores do today."

From what researchers know of Velociraptor, the sickle claw on the second toe of each foot "was used to stick in the bodies," Norell said. "Whether Balaur could do even better with its enlarged pelvic muscles and two large claws rather than one large claw, we don't know. Hopefully we can find more specimens to shed light on it."

The remains of the archipelago containing the bones of Balaur  also yielded all kinds of dinosaurs smaller and more primitive than related animals on larger land masses, such as tiny duck-billed dinosaurs and dwarf sauropods the size of cows. Balaur is the first reasonably complete skeleton of a carnivorous dinosaur from these deposits, which once represented the foothills of mountains that pterosaurs and small animals such as mammals, salamanders and lizards also called home.

"We've all been waiting for something like this, and the wait has yielded an interesting surprise," Norell said. "It shows just how unusual the fauna of the area was during the waning years of the dinosaur era."

Even with the more than 1,000 dinosaurs that have been described, "we're still just starting to get a handle on their diversity," Norell added. "Just like we see with birds and mammals today, which go all the way from gophers to whales to bats to hummingbirds to ostriches, dinosaurs are just as remarkable and occupied the same variety of habitats. Each time we find one of these new animals, it just reiterates just how complex the world was in the Cretaceous and how similar it was to the world today."

Csiki said,  "We can expect some real nice discoveries in the future."

The scientists detailed their findings online Aug. 30 in the Proceedings of the National Academy of Sciences.