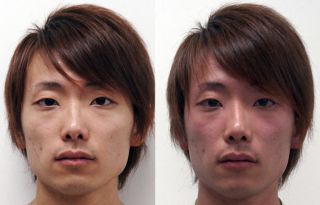 Facial flushing in a 22-year-old ALDH2 heterozygote (single-copy carrier) before (left) and after (right) drinking alcohol. The individual pictured in this figure has given written consent for publication of his picture using the PLoS consent form.
(Image: © PLoS)

Berkeley's incoming freshmen face the unprecedented choice of whether to take part in a genetic testing program this fall. But the students who volunteer for the controversial new test may get more than they bargained for if it turns up a gene deficiency responsible for what is known as "the Asian flush."

The gene has complex health implications that go beyond the surface symptom of a red face after downing an alcoholic drink or two. Even social drinkers are at higher risk of developing deadly esophageal cancer if they have a deficient version of the aldehyde dehydrogenase 2 (ALDH2) gene, according to years of research.

That knowledge seems missing so far from the University of California-Berkeley's education initiative about genetic testing and the future of personalized medicine, called "Bring Your Genes to Cal." The program gives the new class of freshmen students the choice of submitting cheek swab samples to test confidentially for variants of three specific genes. One of them is ALDH2.

"Yeah, we purposefully chose three genes that are not disease-associated," said Mark Schlissel, a Berkeley dean of biological science, during an NPR interview. He repeated the lack of disease association when talking specifically about ALDH2.

His statements puzzled Dr. David Goldman, section chief of the human neurogenetics lab at the National Institute on Alcohol Abuse and Alcoholism (NIAAA).

"He said it [the genetic testing] just has interesting social complications, but in fact he's completely wrong," Goldman said. "There are two important medical implications for the test."

One of those implications involves the risk of developing cancer in the esophagus, the muscular tube that links the mouth and stomach. The other involves vulnerability to alcoholism.

Many incoming Berkeley students probably already know about their Asian flush, Goldman pointed out. The California university has a large Asian population among its student body, and studies show that about 40 percent of East Asians experience Asian flush.

But Goldman questioned whether the university will properly inform students about their genetic test results and what they mean for the students' future health.

Information about the health issues does not appear in Berkeley's video consent form for freshmen who agree to the genetic testing. That may present an informed-consent problem if the test is "not what they signed up for," according to George Annas, a bioethicist at Boston University.

"Almost every week, this turns out to be more complicated than the people at Berkeley had anticipated," Annas said of the cheek swabs. "I'm not against the idea in principle, but it seems premature to have applied it to the freshman class without thorough background knowledge."

How alcohol goes down

The health issues surrounding ALDH2 arise from its role in helping break down alcohol in the liver. An enzyme known as alcohol dehydrogenase (ADH) first breaks ethanol down into acetaldehyde – a carcinogen that causes DNA damage and mutations that can lead to cancer.

ALDH2's enzyme breaks down that acetaldehyde into acetate, and renders the carcinogen harmless.

People of East Asian descent, such as Chinese, Japanese and Koreans, can have two main variants of the ALDH2 gene that codes for the enzyme. One variant, ALDH2*1, functions normally, but ALDH2*2 has an inactive protein that renders the enzyme useless.

Those who inherit two copies of ALDH2*2 suffer from Asian flush, nausea and heart palpitations as the acetaldehyde quickly builds up in their bodies (including in saliva). Their immediate bodily reaction to alcohol discourages them from drinking, thereby reducing their risk of becoming a practicing alcoholic.

Anyone with just one copy of ALDH2*2 faces more complications. They experience less severe versions of Asian flush and other symptoms, because they have only low levels of the enzyme that breaks down acetaldehyde.

The lesser symptoms can encourage single-copy carriers to drink more – an action that still leads to a buildup of acetaldehyde in their saliva. That may put them at greater risk of esophageal cancer, compared with the two-copy carriers or people with normal genes.

"It increases your risk of esophageal cancer for the same amount of alcohol consumed, compared to someone who is able to fully metabolize the acetaldehyde," said Philip Brooks, a molecular neurobiologist at the NIAAA.

Berkeley's online student FAQ and video consent form for the genetic testing program mention the Asian flush and nausea symptoms. But they do not describe the esophageal cancer risk or the issue of alcoholism.

"Most Asians that have this allele [gene variant] don't have esophageal cancer, so the question is the interaction between genes and environment," said Japser Rine, a geneticist at the University of California-Berkeley and one of the designers of "Bring Your Genes to Cal."

Rine also pointed out that association with a disease does not mean a direct causal link has been found. But the NIAAA researchers left little doubt about the strong cancer association with Asian flush.

"The biochemistry of it all and the mechanism of it all make sense," Brooks told LiveScience. "I think it's a very solid story from the epidemiological and mechanistic standpoint."

Esophageal cancer, which is relatively rare and hard to detect, represents one of the deadliest cancers in the world. Barely 16 percent of U.S. patients survive to the five-year mark. In Japan, which has actively attempted to screen for esophageal cancer, almost 32 percent of patients live five years.

Studies in Japan and Taiwan have shown strong epidemiological links between populations with Asian flush and sufferers of esophageal cancer. Researchers in separate studies also found clear signs of DNA damage or mutations caused by acetaldehyde.

"Some people talk about flush as an embarrassing thing," Brooks said. "Our point is that it's not just embarrassing. There's a real risk here."

A single-copy carrier who drinks two beers a day is six to 10 times more likely to develop esophageal cancer than a person with the fully active genes, according to a series of Japanese studies led by Akira Yokoyama, a physician at the National Hospital Organization Kurihama Alcoholism Center in Japan.

The same studies showed that Asian-flush individuals who drink 33 or more U.S. standard drinks per week have 89 times the risk of developing esophageal cancer compared with non-drinkers.

That risk only worsens if the person becomes an alcoholic, or smokes along with drinking. The cancer most often appears among adults over the age of 55, and afflicts men more often than women.

Brooks, Yokoyama, Goldman and other colleagues joined together to urge greater awareness among physicians and the public, and wrote a paper which was published in the journal PLoS Medicine last year.

What's in a cure?

That warning has yet to spread far and wide,  if Berkeley is any indication. Many people also seem more concerned about the cosmetic effects of Asian flush than its health implications, the NIAAA researchers said.

Impromptu remedies and even specific products abound that supposedly help unhappy Asian drinkers eliminate their unsightly flush. Don't believe any of it, said Sam Zakhari, director of the division of metabolism and health effects at NIAAA.

Some college students turn to antihistamines or antacids to reduce the Asian flush effect, yet they don't break down the acetaldehyde, either, Zakhari said, and so the esophageal cancer risk remains.

No existing product represents a complete cure, Zakhari added, but he pointed to a study that found a molecule called Alda-1 repairs the defective ALDH2 enzyme. That finding was detailed in the January 2010 issue of the journal Nature Structural and Molecular Biology.

The complicated relationship between the ALDH2 gene variants, alcoholism and esophageal cancer means that Berkeley should take special care to inform its students about their test results, the NIAA's Goldman says.

"Is it done with a test report, or in a counseling context where they sit down and talk about alcoholism in the family or drinking habits?" Goldman asked.

He  suggested ways the situation could be handled.

A freshman who turns out to have one copy of the ALDH2*2 variant might be given different information or counseling about the cancer risk than a freshman whose two copies of ALDH2*2 discourage excessive drinking. A one-copy carrier also could be recognized to be at greater risk if he or she has a family history of alcoholism.

Berkeley does discourage alcohol consumption in its online FAQ and video consent form.

Rine, one of the Berkeley program leaders, declined to go into specifics about whether a September lecture for the genetic testing program would include details about the esophageal cancer and alcoholism issues. He also did not comment on whether the details should have been in the consent form and the frequently asked questions site that described the program.

At the very least, the Berkeley program should offer serious genetic counseling for students who participate in the program, according to Annas, the Boston University bioethicist.

"If it [the cancer risk] exists, then they do need more heavy-duty counseling, because that's a risk of death you could minimize by behavioral change," Annas said in a phone interview.

Rine confirmed that the university is now organizing free genetic counseling through the campus health services, but did not foresee any great demand for such services from the participating Berkeley students.

The genetic counseling marks a change from the program's earlier plan, where students with questions about their results would have been referred to Rine.

"Bring Your Genes to Cal" had already come under criticism, both from outside bioethicists and from Berkeley faculty who study the intersection of genetics and society. By contrast, Goldman's challenge is based less on ethics and more on the scientific underpinnings of the project and represents a National Institutes of Health researcher voicing concern about the program.

Annas suggested that the genetic testing program was not ready for "prime time," even if the university seems intent on forging ahead. He also expressed doubt about the educational benefits.

"The only lesson you can reasonably teach a freshman is that genetics is very complicated, and we don't know a lot," Annas said.

But for Goldman, the physician and neurogenetics researcher, it seemed unbelievable that the Berkeley program would fail to incorporate what knowledge exists about the ALDH2 variant and its related health issues.

"I certainly don't see the educational value of it when the people performing the test seem to be so ignorant of the implications of the test," Goldman said.

For his part, Rine said that the amount of attention the program has gotten is "way out of proportion" and that it is "not a research project." He added that Goldman is welcome to submit educational materials for the students.