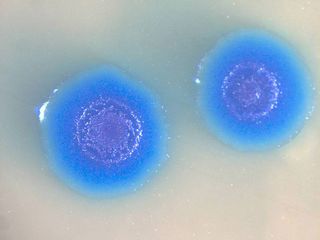 Researchers transplanted the genomes of Mycoplasma capricolum bacterium into Mycoplasma mycoides bacterium in 2007. They later accomplished the same trick with a synthetic genome in 2010.
(Image: © J. Craig Venter Institute.)

But everyone agreed that now is the best time to shape synthetic biology in a way that boosts innovation and hedges against future risks related to biosecurity and biosafety. The uncertain power and perils of synthetic biology still present the greatest challenges, along with the future spread of such technology in the hands of so-called garage biologists.

The commission convened in response to last month's announcement of the first synthetic genome transplantation into a living cell, when molecular biologist J. Craig Venter and other researchers at his institute essentially replaced the genome of a Mycoplasma capricolum cell with an artificially built genome based on the bacterium Mycoplasma mycoides.

That does not mean scientists have successfully created an artificial organism from the bottom-up. The synthetic genome was largely based on the natural design of the one bacterium, and it required the living cell machinery of the second bacterium to function. Yet it hints at a future level of human control over DNA that could create and harness living organisms to create biofuels and personalized medicine tailored to each individual.

"Here is my limited opinion: I believe that the capacity to synthesize and construct DNA is currently the number one most important technology of the 21st century," said Drew Endy, a bioengineer at Stanford University and director of BIOFAB International. "The only thing I can imagine that would trump this would be some source of clean, renewable fuel."

Much of the discussion also touched on risks of harm as well as possible benefits. Endy acknowledged that accidents and misuses of biology would occur, and pointed to past research cases such as the genetic therapy-related death of Jesse Gelsinger at the University of Pennsylvania in 1999, and the anthrax mail attacks of 2001. Other experts pointed to the risk of uncontrolled releases of synthetic organisms into the environment.

Members of the bioethics commission each questioned experts after each session panel last Thursday and Friday, and also invited questions from the public. The experts ranged from leading molecular biologists and bioengineers to policy researchers, bioethicists and a special agent from the FBI.

State of the science

In the latest synthetic biology triumph, Venter's group used a DNA synthesizer that could convert digital information about a gene sequence into the actual physical product. The machine works by organizing how four different bottles dispense the chemical building blocks that form the DNA.

Researchers have managed to construct up to a million base pairs from scratch, where a base pair consists of two nucleotide molecules that sit opposite one another on complementary strands of DNA and RNA. That represents a 100-fold increase compared with six years ago.

Another six years might result in 100 million base pairs – an accomplishment that rivals most known microbe genomes, and comes close to the genomes of the worm C. elegans or the fruit fly Drosophila, Endy pointed out. (For comparison, humans have some 3 billion base pairs.)

"Now that doesn't mean we're going to know how to weave a worm, or fly a fly, or hammer out a human, but it means we're going to have the capacity to tinker at a level of genetics that's new," Endy said.

The ability to build a synthetic genome does not mean researchers know how to put DNA sequences together in a viable way. All the experts emphasized how little biologists and bioengineers understand about existing organisms, and how much they still rely upon natural gene sequences that already exist.

"The [J. Craig Venter] authors used a bacterial genome that had gone through 4 billion years of refinement, to which they made only modest changes," said Bonnie Bassler, a molecular biologist at Princeton University and president of the American Society for Microbiology.

That represents an incremental step forward, but doesn't provide new insight or information about the nature of life, Bassler noted.

Yet looking at synthetic biology research in its early stages could represent an advantage for the bioethics commission, according to James Wagner, commission vice chair and president of Emory University in Atlanta.

"It's a chance to examine the genie inside the bottle," Wagner told LiveScience during a break between sessions.

Synthetic biology might still impact people's lives sooner than they think. Venter said during a panel session that he has begun work with the National Institutes of Health to make the synthetic components of every flu vaccine ever sequenced, so that researchers could whip up a flu vaccine seed candidate within 24 hours.

Venter's collaboration with the pharmaceutical company Novartis could also mean that next season's flu vaccines will take advantage of synthetic genomics work. But he and other experts cautioned they can't produce flu vaccines quickly unless traditional incubation methods using chicken eggs get a boost.

Many experts argued that synthetic biology would contribute immensely to a future that enables energy independence from traditional sources, and also better prepare modern societies against the threat of infectious disease outbreaks or pandemics.

An equally promising result of synthetic biology comes from putting power in the hands of DIY garage biologists, who tinker with digital designs of DNA sequences outside of research institutions, universities or major companies. That has cultivated a sense of creative investigation and entrepreneurship that may help drive innovation.

Yet that free-wheeling community also presents a challenge for the federal government, which wants to ensure that rogue individuals don't intentionally or unintentionally pose dangers by unwisely tinkering with infectious disease agents or unleashing new synthetic organisms upon the environment.

Such scenarios are still at least a decade away, if only because garage biologists don't yet have the affordable tools or the expertise to try and replicate the work of professional researchers, experts agreed. But their fringe status also means that they don't have to submit to the same scrutiny as researchers who receive federal funding.

One solution to the scrutiny problem may come from boosting collaboration between professional researchers and garage biologists, experts said. The major companies that synthesize DNA sequences for customers have also volunteered to watch out for suspicious requests, whether it involves synthesizing part of an infectious agent or someone requesting separate DNA sequences from all the major companies.

How to move innovation forward

Rather than a single unified approach for anything produced through synthetic biology, the federal government regulates each product under a patchwork of rules according to different agencies such as the Food and Drug Administration, the U.S. Department of Agriculture and the Environmental Protection Agency.

Those regulations have worked "reasonably well" despite the patchwork approach, said Michael Rodemeyer, a science and technology policy expert at the University of Virginia.

Some criticisms of overregulation came from Rob Carlson, a principal at the engineering, consulting and design firm Biodesic. He warned that the government ran the risk of stifling the creative freedom and innovation of synthetic biology, or even pushing researchers to the fringes.

Carlson also asked the commission to consider the issue of patents and commercial ownership. He noted the legal costs of trying to acquire patents sometimes outweighed the costs of developing a new molecule by as much as 10 times.

By contrast, George Church, a geneticist at Harvard University in Boston, pushed for more licensing of the synthetic biology community so that existing regulations could have more reach. He also differed from Carlson on the patent issue.

"Most of my experience with dozens of companies is that they can get the job done without spending a lot of money on lawyers," Church said. "Very often you don't even really need the patents; in the end it's the know-how that's incredibly important."

The bioethics commission plans to hold at least two more meetings on synthetic biology before advising the president on what to do. For now, anyone with ideas or suggestions can contact the commission at info@bioethics.gov.