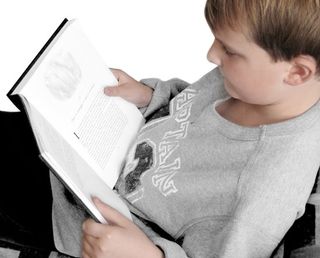 Any avid reader knows the power of a book to transport you into another world, be it the wizard realm of "Harry Potter" or the legal intrigue of the latest John Grisham.

Part of the reason we get lost in these imaginary worlds might be because our brains effectively simulate the events of the book in the same way they process events in the real world, a new study suggests.

The new study, detailed in the July 21 issue of the journal Psychological Science, builds on previous work that links the way our brains process images and written words to the way they process actions we perform ourselves.

Examining these links could shed light on why some people enjoy reading more than others and how our reading abilities change with time. Essentially, some people might paint a more vivid mental picture of written prose than others.

Kick in the brain

For example, reading a simple verb such as "run" or "kick" activates some of the same regions of the brain that would be activated when we actually go running or kick a ball.

But reading a single word isn't quite the same as reading a long, continuous passage. Jeffrey Zacks and his colleagues at Washington University in St. Louis set out to see whether the same pattern held for continuous reading by monitoring the brain processes of study participants with functional magnetic resonance imaging (fMRI) scans.

The 28 study participants (20 women and 8 men) spent about 10 minutes reading four narratives, each less than 1,500 words, taken from the book "One Boy's Day." The words from the book were flashed onto a screen that the participants could read on a mirror in front of their faces.

The book follows a school-age boy during a typical day, and was created by psychologists as a research tool. The passages were used in this study because they were a simple narrative of everyday activities that participants would easily relate to and process.

The book "avoids some of the novelistic techniques that would make it a little harder for us to generalize back to the understanding of real life," Zacks said, such as skipping around through time or long inner monologues.

Essentially, Zacks and his team were trying to suss out how a reader parses an ongoing text into meaningful events.

After the participants had read the passages, the researchers would ask them questions to see if they recognized where these changes occurred in the text. They then looked at the fMRI data to see if brain activity in key areas spiked with the changes — it did.

"It turns out that there are focal areas that are selectively involved in each of these kinds of processing," Zacks said.

The data doesn't show quite the same specificity that studies where participants read a single word show. For example, while reading the phrase "raise right arm" might activate the area of the brain that controls that action, reading that phrase in the context of a longer passage only shows activation in the general motor control areas of the brain.

Zacks is optimistic though that the results showing more specific match-ups "are going to generalize to continuous reading;" they will just take more testing and lots of data, he said.

Understanding how our brains process the events and changes while reading could help us understand some of the individual differences in reading, for example, why some people are sucked in by stories more than others.

While some readers can actually picture what they read, others may not.

"There are readers, competent readers, who say 'I have no pictures in my head when I read'," Zacks said.

Further studies could see whether there really is a difference between how the brains of these two types of people process the words and phrases they read.

"It may be the case that some people do this more than others," Zacks said.

With further study, Zacks also hopes to tease out how this brain processing changes across life span, and how it is affected by diseases such as age-related dementia and other neurophysiological changes.

The current study was funded in part by the National Institute of Mental Health and the American Psychological Association (which publishes the journal Psychological Science).