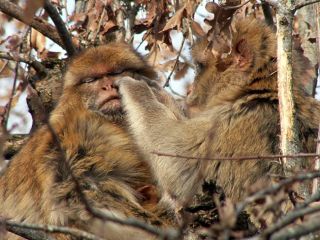 A Barbary macaque is groomed by a fellow member of its species, Macaca sylvanus. New research indicates that females shout during sex to help males ejaculate.
(Image: © Dana Pfefferle)

Female monkeys often utter loud, distinctive calls before, during or after sex. Their exact function, if any, has remained heavily debated.

To investigate the purpose behind these calls, scientists at the German Primate Center in Göttingen focused on Barbary macaques for two years in a nature reserve in Gibraltar.

To see if yelling resulted from how vigorous the sex was, the scientists counted the number of pelvic thrusts males gave and timed when they happened. They found when shouting occurred, thrusting increased. In other words, hollering led to more vigorous sex.

Counting monkey pelvic thrusts is admittedly "quite weird, but it's science," researcher Dana Pfefferle, a behavioral scientist and primatologist at the German Primate Center, told LiveScience. "You get used to it."

Male and female Barbary macaques are promiscuous, often having sex with many partners. This means sperm levels can get quite drained. The females shout when they are most fertile, so males can make the most use of their sperm.

Pfefferle noted her research suggests these calls might also make females more attractive to other males. She added these shouts might play different roles in other species.

Pfefferle and her colleagues detailed their findings online Dec. 18 in the journal Proceedings of the Royal Society B.