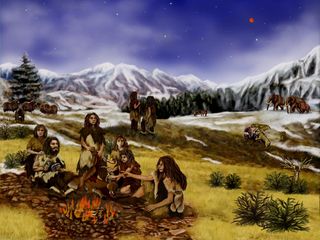 Neanderthals are humanity's closest extinct relatives. Since their discovery more than 150 years ago, researchers have found out they could make tools just like our ancestors could, but whether Neanderthals also had advanced language, rather than mere grunts and groans, has remained hotly debated.

To learn more, scientists investigated DNA from Neanderthal bones collected from a cave in northern Spain, concentrating on a gene, FOXP2, which is to date the only one known to play a role in speech and language. People with an abnormal copy of this gene have speech and language problems.

Genes similar to FOXP2 are found throughout the genomes of the animal kingdom, from fish to alligators to songbirds. The molecule that human FOXP2 generates differs from chimpanzee FOXP2's by just two amino acids, the building blocks of proteins.

Past research suggests the gene's modern human variant evolved fewer than 200,000 years ago. Now scientists find the Neanderthal FOXP2 gene is identical to ours. The ancestors of Neanderthals diverged from ours roughly 300,000 years ago, according to the latest thinking. Some studies have suggested that the two species might have intermingled after that, however.

"It is possible that Neanderthals spoke just like we do," paleogeneticist Johannes Krause of the Max Planck Institute for Evolutionary Anthropology in Leipzig, Germany, told LiveScience.

"Of course many genes are involved in language," cautioned Krause, the new study's lead researcher. As scientists discover more of such genes, these will have to be examined in Neanderthals as well, he said.

Krause noted that some might suggest that interbreeding or "gene flow" (aka sex) between modern humans and Neanderthals led to us having FOXP2 in common. "However, we see no evidence for gene flow in the Y chromosome sequences," he said. Instead, the modern human and Neanderthal Y chromosomes are substantially different genetically.

Krause and his colleagues detailed their findings online Oct. 18 in the journal Current Biology.