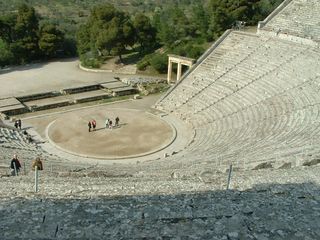 The Theater at Epidaurus on the Peloponnese in Greece

Cut the chatter! The ancient mystery surrounding the great acoustics of the theater at Epidaurus in Greece has been solved.

The theater, dating to the 4th century B.C. and arranged in 55 semi-circular rows, remains the great masterwork of Polykleitos the Younger. Audiences of up to an estimated 14,000 have long been able to hear actors and musicians--unamplified--from even the back row of the architectural masterpiece.

How this sonic quality was achieved has been the source of academic and amateur speculation, with some theories suggesting that prevailing winds carried sounds or masks amplified voices.

It's in the seats

Now, researchers at the Georgia Institute of Technology have discovered that the limestone material of the seats provide a filtering effect, suppressing low frequencies of voices, thus minimizing background crowd noise. Further, the rows of limestone seats reflect high-frequencies back towards the audience, enhancing the effect.

Researcher Nico Declercq, a mechanical engineer, initially suspected that the slope of the theater had something to do with the effect.

"When I first tackled this problem, I thought that the effect of the splendid acoustics was due to surface waves climbing the theater with almost no damping," Declercq said. "While the voices of the performers were being carried, I didn't anticipate that the low frequencies of speech were also filtered out to some extent."

However, experiments with ultrasonic waves and numerical models indicated that frequencies up to 500 hertz (cycles per second) were lowered, and frequencies higher than 500 hertz went undiminished, he said.

The corrugations on the surface of the seats act as natural acoustic traps. Though this effect would seem to also remove the low frequencies from the actors' voices, listeners actually fill in the missing portion of the audio spectrum through a phenomenon known as virtual pitch. The human brain reconstructs the missing frequencies, producing the virtual pitch phenomenon, as in listening to someone speaking on a telephone with no low end.

The findings are detailed in the April issue of the Journal of the Acoustics Society of America.

Amazingly, the Greek builders of the theater did not themselves understand the principles that led to the exceptional audibility of sound from the stage.

Attempts to recreate the Epidaurus design never quite matched the original. Later seating arrangements featured other materials, such as wood for the benches, an approach which may have ultimately derailed the design duplication effort.