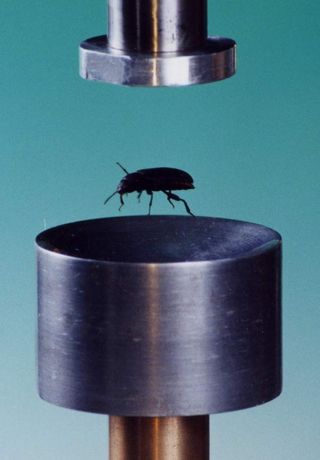 In the past, researchers at Northwestern Polytechnical University in Xi'an, China, used ultrasound fields to successfully levitate globs of the heaviest solid and liquid—iridium and mercury, respectively. The aim of their work is to learn how to manufacture everything from pharmaceuticals to alloys without the aid of containers. At times compounds are too corrosive for containers to hold, or they react with containers in other undesirable ways.

"An interesting question is, 'What will happen if a living animal is put into the acoustic field?' Will it also be stably levitated?" researcher Wenjun Xie, a materials physicist at Northwestern Polytechnical University, told LiveScience.

Xie and his colleagues employed an ultrasound emitter and reflector that generated a sound pressure field between them. The emitter produced roughly 20-millimeter-wavelength sounds, meaning it could in theory levitate objects half that wavelength or less.

After the investigators got the ultrasound field going, they used tweezers to carefully place animals between the emitter and reflector. The scientists found they could float ants, beetles, spiders, ladybugs, bees, tadpoles and fish up to a little more than a third of an inch long in midair. When they levitated the fish and tadpole, the researchers added water to the ultrasound field every minute via syringe.

The levitated ant tried crawling in the air and struggled to escape by rapidly flexing its legs, although it generally failed because its feet find little purchase in the air. The ladybug tried flying away but also failed when the field was too strong to break away from.

"We must control the levitation force carefully, because they try to fly away," Xie said. "An interesting moment was when my colleagues and I had to catch escaping ladybugs."

The ant and ladybug appeared fine after 30 minutes of levitation, although the fish did not fare as well, due to the inadequate water supply, the scientists report.

"Our results may provide some methods or ideas for biology research," Xie said. "We have tried to hatch eggs of fish [during] acoustic levitation."