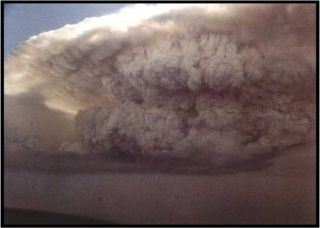 A pyrocumulonimbus looms. Seventeen of these fire-fueled storms happened in 2002 in Canada and the United States alone.
(Image: © Michael Fromm.)

Wildfires ravage the Earth's surface, but they also disrupt the atmosphere, creating monstrous thunderstorms that occur surprisingly frequently, according to new research unveiled Monday at this year's meeting of the American Geophysical Union in Brazil.

Fire-caused thunderstorms, called pyrocumulonimbus storms — pyrocbs (pronounced PIE-row SEE-BEEs), for short — can inject smoke and other particles six to 10 miles (10 to 16 kilometers) into the atmosphere, far higher than most storms, which generally occur lower in the atmosphere, said Michael Fromm, a meteorologist at the Naval Research Lab in Washington, D.C.

"We're finding that rules are a little different for pyrocbs," Fromm told OurAmazingPlanet, "and we think it's because they have heat energy associated with them that's equivalent to a minor volcanic eruption."

In fact, Fromm said, volcanoes have unfairly gotten some of the blame for particles seen in the lower stratosphere when, in fact, wildfire-produced storms shot the material up into the region. The smoke and associated gases can remain in the atmosphere for many months, and are carried around the globe by air currents.

With the development of new analysis techniques of satellite data, researchers were able to find what Fromm called the "smoking gun" behind these storms and their accompanying, high-flying smoke.

Just in the last few weeks, satellite data have indicated that the wildfires currently terrorizing Russia have produced at least three of these massive thunderstorms.

Fromm said a pyrocb can happen anywhere if the conditions are right. "It's less important what is burning than how much is instantaneously burning — it could be grassland, forests, it could be a city," he said.

If a fire burns intensely enough, one of these badly behaved storms can form.

Fromm said the research is so new that scientists don't yet have models to predict how these storms may affect the climate as a whole. However, by looking back through years of satellite data, Fromm said researchers can figure out if these massive storms are an increasing trend.