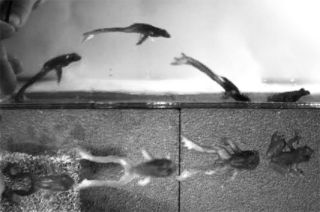 The primitive frog Ascaphus montanus can jump fine, but rather than a graceful landing this amphibian does a belly flop.
(Image: © Richard Essner.)

Frogs had generally been assumed to all jump in a similar manner — by rapidly extending their back legs as they launched themselves forward and rotating their limbs forward during flight so that they could land front legs first.

However, no studies had analyzed the jumping behavior of the most primitive living frogs, part of a group dubbed Leiopelmatidae that possess ancient features such as more vertebrae. These are unique among frogs in using a trot-like swimming gait instead of extending and flexing their hind limbs together for a standard frog-kick swimming gait.

Scientists compared high-speed video footage of jumping behavior between three species of primitive frogs and two advanced ones. They typically enticed the frogs to jump by tapping right behind the animals.

Although launch movements were similar among the species, primitive frogs kept their back legs extended throughout flight and landing. As such, they often flopped onto their bellies instead of landing on their front legs.

"The unusual landings were a surprise to me," researcher Richard Essner, a functional morphologist at Southern Illinois University in Edwardsville, told LiveScience. "Sometimes they landed feet first, but other times they landed nose first and skidded along the ground for a while."

These findings suggest frogs became proficient at jumping before they perfected landing. This inability of primitive frogs to rapidly rotate their limbs forward during flight might also explain why they swim differently than more advanced frogs. Unusual anatomical features that primitive frogs possess, such as large, shield-shaped pelvic cartilage and abdominal ribs, could help prevent damage to their internal soft tissues and organs during these uncontrolled landings.

"Other frogs land ready to jump again, and these frogs don't," Essner said. "These primitive frogs split off from other frogs probably more than 200 million years ago, before Pangaea split apart and apparently before frogs really developed controlled landings."

As one might imagine, belly flops keep primitive frogs from quickly jumping again. The more graceful landings advanced frogs possess may have enabled them to travel farther and help in escaping predators and chasing after prey.

These findings are in line with notions that frogs first evolved jumping in riverside habitats. "When you're jumping into the water to escape predators, you don't really have to care about the quality of the landing, you just want to get into the water," Essner said.

Essner and his colleagues detailed their findings online July 13 in the journal Naturwissenschaften.