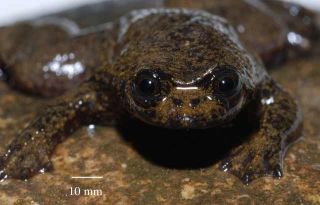 The first lungless frog has been discovered lurking in the jungles of Borneo.
(Image: © David Bickford)

The first lungless frog has been discovered lurking in the jungles of Borneo.

The enigmatic amphibian, dubbed Barbourula kalimantanensis, apparently gets all the oxygen it needs through its skin.

Scientists first saw one of these frogs 30 years ago, but due to their rarity, just one other specimen had been collected since then and neither had been dissected.

"No one thought to open them up — there was no real reason to believe that they could be lungless," said researcher David Bickford, an evolutionary biologist at the National University of Singapore. "Because these specimens were so rare, they had never been dissected. If you have just one specimen in your museum, you don't want to rip it open!"

The amphibians, no more than 2 inches long, have proven elusive because they live in cold, fast rivers in remote areas of the rainforests of Kalimantan, the Indonesian part of Borneo. Also, they are slippery "and can be surprisingly fast for short bursts," Bickford said. "We had a team of 11 people looking for these frogs and it took us almost two weeks before we found any."

He and his colleagues had no idea this frog would be lungless.

"I was just going to be happy if we simply rediscovered the frogs," Bickford said. "It had been 30 years of intermittent searching for this frog until we could put together a multinational team and get to the last remaining areas where it could realistically be found."

As Bickford and his colleagues went snorkeling in the rivers where the frogs live, the water proved so cold that "after just 45 minutes of snorkeling, I would have to stop because I was shaking uncontrollably, my lips were blue, and my breathing became too labored to actually snorkel effectively," Bickford told LiveScience. "This is lowland rain forest in Borneo, just off the equator, and I had hypothermia! That certainly was something I was not entirely prepared for."

"There are so many difficulties in field work, and yet it remains my biggest joy," Bickford added. "Having the undeniable privilege of going out to these remote sites, seeing some of the last and greatest treasures that exist in the wild, and then getting to study them — well, every day I feel lucky."

As the researchers were doing initial dissections of the frogs as they caught them in the field, they were surprised to discover these amphibians lacked lungs.

"At first I did not believe that the frogs had no lungs, but then, we just kept on seeing the evidence pile up. I was flabbergasted," Bickford said.

"The thing that struck me most then and now is that there are still major firsts — for example, first lungless frog! — to be found out in the field," Bickford added. "All you have to do is go a little ways beyond what people have done before, and — voila!"

It appears that the rest of the internal organs in these frogs have shifted position to take up the space once filled by the lungs. "So we had the stomach, spleen and the liver up in the area where lungs are normally found," Bickford said. "Interestingly, we also discovered some abnormal cartilage around the area where the lungs should have been that we are still investigating."

The loss of lungs helped the frogs severely flatten their bodies. This in turn increased the surface area of their skin, which helps them absorb oxygen.

The researchers conjecture the loss of lungs might be an adaptation to the cold, fast rivers the frogs live in. Such waters naturally have high oxygen content. Also, the frogs would rather sink than float and get carried away in the water, so getting rid of lungs, which behave as flotation devices, would prove helpful.

Amphibians are also cold-blooded, "so their inherent energy requirements are very small — roughly 10 percent that of a similar sized mammal," Bickford said. "If you don't need as much oxygen anyhow, it might be easier to change, to lose lungs as the primary respiration organ."

The family of frogs this novel amphibian belongs to ranks among one of the most primitive, if not the most primitive. The more primitive lineages could have an easier time switching to lunglessness, but "at this stage this is all conjecture," Bickford said.

The loss of lungs has been known to occur two other times in all the creatures with backbones that have waddled onto land across geologic time. Each time this loss has happened in amphibians — in a species of caecilian, a limbless beast resembling an earthworm, and in many species of salamanders. How and why this change evolved in these animals has been long debated, and the new frog could shed light on this curious phenomenon.

The closest relative of this frog, which dwells in the Philippines, has lungs.

"This basically means we know where the evolutionary change occurred and we roughly know when it could have happened — not before those two species split," Bickford said. "These are actually really important when you need to find out about how something evolves — context and timing. Specifically, we will need to do some comparative studies between the Borneo species and the Philippine species to help us understand the ecological, developmental and genetic mechanisms for this exciting evolutionary event."

Much remains unknown about these amphibians.

"We don't even know what they eat, although we have some good guesses from two full stomachs," Bickford said. "How do they locate and attract mates? What do their eggs look like? Do they even lay eggs, or do they have a more derived mode of reproduction where the eggs directly develop into small frogs? Do they have tadpoles? What are their habitat requirements? How many are left?"

The rarity of this frog could hamper further studies into it, Bickford added. The amphibian could become even more rare, given the increasing damage to its environment as the result of toxic metals used in mining and other unfortunate consequences of development on the island.

"The once cool and clear streams have mostly turned murky and warm, contaminated with human pollutants, run-off from agriculture and mercury from the gold mining," Bickford said. "This is an endangered frog that we know practically nothing about, with an amazing ability to breathe entirely through its skin, whose future is being destroyed by illegal gold mining by people who are marginalized and have no other means of supporting themselves. There are no simple answers to this problem."

One of the primary goals of the researchers now is to garner more support for conserving the last remaining wild spots in Borneo, "and I think we have a flagship species in these lungless frogs," Bickford said. "There is so much we do not understand about nature and at least part of the reason to protect it is to protect our own futures."

Bickford and his colleagues Djoko Iskandar and Anggraini Barlian will detail their findings in the journal Current Biology.