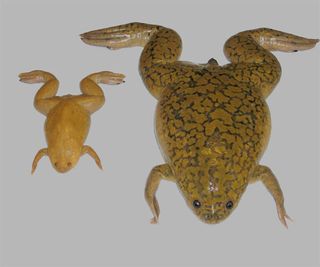 African clawed frogs have more in common with humans than you might think, according to their newly sequenced genome, which shows a surprising number of commonalities with the human genome.

The frog in question is a slimy, rotund type scientifically named Xenopus tropicalis. This is the first time an amphibian genome has been sequenced, and scientists say it represents a big hop forward in understanding not just frogs but Earth's whole tree of life.

"A lot of furry animals have been sequenced, but far fewer other vertebrates," said study co-leader Richard Harland, a biologist at the University of California, Berkeley. "Having a complete catalog of the genes in Xenopus, along with those of humans, rats, mice and chickens, will help us reassemble the full complement of ancestral vertebrate genes."

Currently, more than 175 organisms have had their genetic information nearly completely sequenced. That's just a drop in the bucket of the world's plethora of life.

In fact, many of Earth's creatures are more similar to each other, genetically speaking, than you might guess just by looking at them. When scientists compared regions around specific genes in the frog genome to those same regions in chicken and human genomes, they found some amazing similarities, indicating a high level of conservation of organization, or structure, on the chromosomes (packets of DNA in cells).

"When you look at segments of the Xenopus genome, you literally are looking at structures that are 360 million years old and were part of the genome of the last common ancestor of all birds, frogs, dinosaurs and mammals that ever roamed the Earth," said study leader Uffe Hellsten of the Department of Energy's Joint Genome Institute in Walnut Creek, Calif. "Chromosome archaeology helps [us] to understand the history of evolution, showing us how the genetic material has rearranged itself to create the present-day mammalian genome and present-day amphibian genome."

At least 1,700 genes in the African clawed frog genome are very similar to genes in humans that are associated with specific diseases, such as cancer, asthma, and heart disease. So finding these connections means that experiments on the frogs could help doctors learn more about how to treat those conditions in people.

The frogs' similarity to humans has come in handy before.

In the early 20th century biologists discovered that these frogs were unusually sensitive to human chorionic gonadotropin (HCG), a hormone produced by pregnant women. The frogs gained popularity as a low-cost pregnancy test in the 1940s and 1950s. Doctors would inject a frog with a woman's urine, and if she was pregnant, the frog would ovulate and produce eggs in 8 to 10 hours.

The new genome could make this frog species even more useful for research and medicine in the future.

"Having the genome in hand helps make Xenopus very attractive for the further study of gene organization, regulation and function," said co-author Jacques Robert, an immunologist at the University of Rochester Medical Center in Rochester, N.Y.

The researchers describe the Xenopus genome in the April 30 issue of the journal Science.