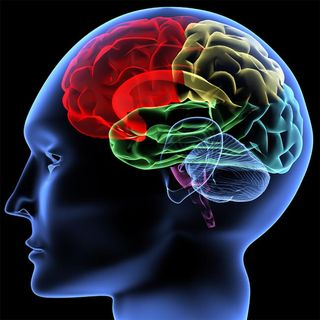 Some people just seem to "get" what someone is saying in a way others don't, and a new study suggests why: When we connect with others in conversation, our brains, in a manner of speaking, link up as well.

The results show that during successful verbal communication, brain responses of the speaker mirror those of the listener. This "coupling" occurs in more regions than just those used for simply processing sounds — extending into brain areas involved in higher thinking, such as those processing the meaning of language.

The more two people's brains are "coupled" in conversation, the better the listener comprehends what the speaker is saying, the researchers say.

"That feeling that we all have when we're interacting with people, I think that what we're trying to do here is show that that feeling of clicking might actually have real neural basis," said study researcher Greg Stephens of Princeton University.

While the subjects of the study didn't actually speak to one another  — the speaker told a real-life story, and the listeners heard a recording of it  — the study was the first to examine how the brain of a speaker and listener interact during natural communication, the researchers say.

Most previous studies focused on just one side of a conversation, said study researcher Uri Hasson, also of Princeton. "I think that scientists were worried of the complexity — understanding how one brain is working is too complex, trying to understand how two brains interact is infinitely more complex," Hasson said in an e-mail.

The results demonstrate the advantages of looking at both subjects involved in communication, rather than just looking at their brains in isolation, Stephens said.

Researchers used functional magnetic resonance imaging to study their subjects' brain activity. They recorded the brain activity of one subject telling a real-life story, as if to a friend, while the subject lay in an fMRI machine. Next, 11 subjects listened to the story, also while having their brains activity recorded.

The researchers then created a statistical model to see how much of the activity in the listener's brain could be predicted by activity in the speaker's brain. In other words, how similar were their brains during this "conversation"?

Extensive coupling was observed in the brains, including in higher brain areas such as the dorsal lateral prefrontal cortex and the striatum, suggesting areas involved in producing speech are also used to interpret it.

"There's much more coupling than you might have expected," Stephens said. "In principle, producing speech and listening to speech are two different things. But because you and I have the same kinds of brains, it might be that those processes … aren't nearly as distinct as we think."

However, comprehension is key for this coupling. When the speaker told a story in Russian, and native English speakers listened to it, coupling was observed only in brain areas used to process sounds, considered low-level processing.

"When you don't understand the story, which you don't if you don't know Russian, then this coupling really doesn't go very far," Stephens said.

Similarly, there was no match-up between the brain signals when the researchers compared speaker's and listener's brains that had spoken and listened to different stories.

A matter of timing

At the end of the experiment, the listeners answered questions to see how well they understood the story. The more speaker-listener coupling there was, the better the listener comprehended the story. "Thus, the more similar our brain patterns during a conversation, the better we understand each other," Hasson said.

The researchers hope future studies will uncover more about how our brains interact during communication, including in a real conversation. Future work may look at whether gender differences affect how we understand each other, Stephens said.

The results will be published this week in the journal Proceedings of the National Academy of Sciences.