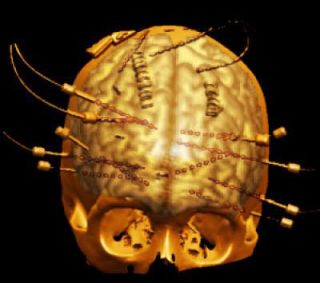 This is a brain scan showing electrodes that surgeons use to find and remove the source of seizures (to cure epilepsy) while sparing the source of mental functions like language.
(Image: © Illustration: Ned T. Sahin, Ph.D.. Brain Image Reconstruction: Sean McInerney.)

In just 600 milliseconds, the human brain can think of a word, apply the rules of grammar to it and send it to the mouth to be spoken. For the first time, researchers have traced this lightning-fast sequence and broken it down into distinct steps.

"If you go a few millimeters to the right or left, you might delete their piano lessons or language ability, and that would be sorely missed," said Ned Sahin of Harvard University, one of the researchers who studied the language network.

Because the electrodes are already monitoring language ability in these patients, Sahin and his colleagues can conduct simple language experiments with willing participants and see language processing in real time; essentially, the electrodes offer a more fine-grained look at neural processes than other traditional brain-monitoring technologies, such as MRIs.

The main brain region Sahin and his colleagues looked at is called the Broca's area, located in the cerebral cortex. This region was discovered to be involved in language processing by the French physician Pierre Paul Broca in 1865.

But beyond knowing that the area is important to language production, "we still have been troublingly unable to pin it down," Sahin said. Whether or not the steps of the language production process happen in parallel or sequentially has been one particularly puzzling question about the brain.

The new electrode study, detailed in the Oct. 16 issue of the journal Science, has set scientists one step closer to understanding the steps of language production in the brain, specifically word recall, the application of grammar (changing tense or number), and actually speaking the word.

By monitoring the brains of three patients while they performed a simple language task (looking at a word, then either using it in a sentence as is or changing its tense or number, and finally articulating it silently), Sahin and his colleagues found three distinct periods of activity in Broca's area at 200 milliseconds (after first being presented with the word), 320 milliseconds and 450 milliseconds.

These three spikes corresponded to the three basic components of language: words, grammar and phonology (the organization of sound). All three also fit within the roughly 600 milliseconds required for the onset of speech.

The finding shows that Broca's area is involved in all three of these language production steps and shows that they happen at distinct points in time, not all at once in parallel, Sahin said.

While the research answers some questions about how the brain generates language, "this is just one piece in the puzzle," Sahin told LiveScience. It will take more study to further detail all the points of language in the brain: when they occur and what parts of the brain they happen in.

But the finding "may be the nail in the coffin" for one persistent, though long-discredited theory that Broca's area processes the speech part of language, while another area of the brain, called the Werneke's area, processes reading and learning words.

"It's not so simple as Broca's speaks and Werneke's listens," Sahin said.

Funding for the study came from the National Institutes of Health, the Mental Illness and Neuroscience Discovery Institute at Harvard, the Weill Medical College of Cornell University and the Harvard Mind/Brain/Behavior Initiative.