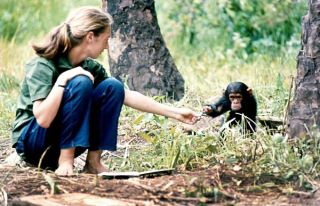 Jane Goodall, pictured here, made a series of groundbreaking discoveries about chimps that made us rethink how unique humans really are when compared with the rest of the animal kingdom.
(Image: © The Jane Goodall Institute/Hugo van Lawick.)

Reflecting on a half-century of pioneering research on chimpanzees, legendary scientist Jane Goodall has called for urgent action to save our closest living relatives from extinction in the wild.

"The survival of chimpanzees requires a dramatic change to how we think about the natural world, as well as advances in science and technology," Goodall wrote in an opinion article published in the July 8 issue of the journal Nature.

In the years since Goodall first set foot in what is now Tanzania's Gombe Stream National Park on July 14, 1960, she made a series of groundbreaking discoveries about chimps. She helped discover how they could make tools, how they could hug, kiss and tickle each other, and how they also had a darker side to their natures, engaging in infanticide, cannibalism and war. These stunning findings not only revolutionized our ideas regarding our closest living relatives, but also made us rethink how unique humans really are when compared with the rest of the animal kingdom.

However, as knowledge about chimpanzees grew over the years, so have threats to their existence, Goodall noted. While there were more than 1 million chimpanzees in Africa in 1900, now fewer than 300,000 remain in the wild, and some conservationists fear they will become extinct in the wild within 30 years.

Several years after she first landed in Gombe, deforestation on a huge scale transformed the 13.5 square miles (35 square kilometers) of wilderness Goodall explored into an island of forest surrounded by bare land. In addition to this loss of habitat, chimps are also vulnerable to human diseases such as polio and the flu. Compounding these threats, chimp numbers have declined because of illegal bushmeat hunting,

These threats aren't unique to Gombe; they also threaten chimpanzees in other parts of Africa.

"I am finding the same sorts of problems in Senegal," said primatologist Jill Pruetz of Iowa State University in Ames who, like many researchers of chimps, cites Goodall as one of their heroes. "One of the biggest threats they face is large-scale mining — something that stems mainly from the so-called developed world's great need for things like automobile parts."

Seeking to make a difference

For more than 15 years, Jane Goodall's institute has worked to improve the lives of people who live near chimpanzees. Addressing the problems of these villagers — such as poverty, drought and erosion caused by unsustainable farming methods, and a lack of basic needs such as clean water, health care and education — can in turn help them in aiding the endangered apes.

"We need to give people, particularly those who live alongside our closest relatives, good reasons to preserve them," Goodall wrote in the opinion piece.

"We must work together with people that live alongside chimps," Pruetz said, agreeing with Goodall and her colleague Lilian Pintea. "We are asking them to give up a lot in some respects, compared to the typical rate of consumption we Westerners exhibit, and these same people are often considered to be stressed for resources themselves."

Basic research also highlights the importance of chimps in the ecosystems that people themselves rely on.

"Part of the scientific research we do at Fongoli [in Senegal] is studying the chimps' diet and specifically their dispersal of important plants in the area," Pruetz said. "For example, seeds of a very important vine species for chimps and humans — humans gather the fruit and sell it to markets in the capitol, and it is one of the few ways that women can bring in cash on their own — germinate more quickly and successfully once they pass through the chimp gut. People are quick to recognize the value that chimps have in terms of ecosystem health in this way, and hunters and other people who spend a lot of time out 'in the bush' are quick to point this out."

Satellite imagery, in combination with remote sensing data and decades of aerial photos, is yielding valuable insights into chimpanzee life to better figure out how to protect them. For instance, vegetation maps helped show that chimpanzees are more likely to hunt successfully in woodland and semi-deciduous forest than in evergreen forest, helping focus efforts to conserve prime chimp habitats.

Recent satellite pictures suggest that deforestation is finally beginning to slow at Gombe, though Goodall still stresses the need to protect our closest primate kin.

"There is no time to waste," Goodall said. "Yet the marvelous advances in science and conservation practices over the past five decades gives me hope."

"If she has hope, then I think I can too. And it is very difficult at times!" Pruetz told Our Amazing Planet. "It takes a lot of funds to do the things that need to be done — improving the conditions of people living alongside apes."