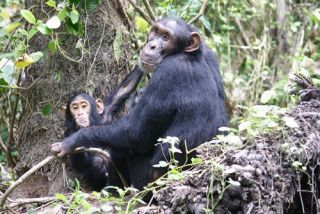 A female chimpanzee and her infant.
(Image: © Katie Slocombe)

The killing of infant wild chimpanzees by female adults of their own kind may be more common than was thought.

What drives these mysterious infanticides by females is not yet clear, but scientists currently speculate that clashes over stomping grounds might fuel these conflicts and that human encroachment on chimpanzee territory might exacerbate the situations.

Male chimpanzees are well known for violence, including the killing of young. Female chimps, on the other hand, "have for a long time been regarded as the less aggressive sex," said comparative psychologist Simon Townsend at the University of St. Andrews in Scotland.

Primatologist Jane Goodall found an infamous exception to this notion of passive females in 1976 with what she dubbed a "barbarous murder" by chimpanzees named Passion and Pom. This cannibalistic mother-daughter duo together killed and ate at least three chimp infants at Gombe Park in Tanzania, with Goodall herself intervening once to prevent another death by shouting and throwing sticks and stones.

Still, in the absence of any other significant evidence for similar killings, researchers speculated the Passion and Pom killings might possibly have been isolated deviant behavior.

New fieldwork has now revealed three more infanticidal attacks by females in the Sonso chimpanzee community in Budongo Forest in Uganda, hinting such "lethal aggression may not be anomalous behavior," Townsend told LiveScience.

Alerted to the killings by sounds of chimpanzee screams, last year Townsend and his colleagues directly witnessed one infanticide, where a bleeding mother with a one-week-old child in tow was pursued by six females, five of which had clinging infants themselves. After a 10-minute struggle, the infant was taken and killed with a bite.

The scientists also found strong circumstantial evidence for two other infanticides. These also involved significant bites to the head, indicating these were intentional and not accidental killings, findings detailed in the May 15 issue of the journal Current Biology.

In at least one case, adult males tried to prevent infanticide, with one unsuccessfully attempting to pull apart fighting females. The researchers suspect the males might have had sex with attacked females in the past, "which explains why they attempted to intervene," Townsend said.

Townsend and his colleagues speculate an unusual influx of females into the Sonso chimp community in the past five years might have precipitated this deadly aggression, as females competed for limited foraging areas. Like the Passion and Pom infanticides, two of these killings were perpetrated by coalitions of females deliberately targeting infants, likely because it is difficult for a lone female to overpower a mother and attack her infant.

The most likely explanation for the surge of immigrant female chimps the researchers saw was the dissolution of a neighboring community after the death of adult males.

"Males could be killed in inter-community conflicts, or through disease, or potentially through human encroachment, but we do not know which of these factors, if any, is the most plausible," Townsend said.

Boston University biological anthropologist Martin Muller, who did not participate in this study, said that "it does seem likely that as humans further encroach on chimpanzee populations we can expect to see more of this kind of aggression, as competition for resources increases among the chimpanzees."

Townsend noted, "We were obviously initially shocked by the level of aggression demonstrated by the females. However we also felt privileged to see such a rare event because of the important implications it has." In terms of what scientists might salvage from such violence, he added, "Any observations which further our knowledge of chimpanzee behavior should prove useful in the long-term conservation of this species."