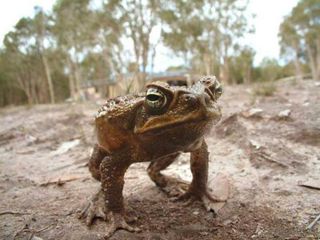 As the planet gets warmer, cane toads — an invasive species that has taken over Australia — will get happier, a new study suggests.

The cane toad might be just one of the lucky species expected to flourish as temperatures increase, a situation expected to spell doom for many plants and animals.

In 1935, 102 Cane toads were brought to Australia to wipe out a species of beetle that was devouring sugar cane crops. The toads ignored the beetles; instead they conquered Australia and today number more than 1.5 billion.

"The negative effect of high temperature does not operate in cane toads, meaning that toads will do very well with human-induced global warming," said biophysicist Frank Seebacher of the University of Sydney in Australia. Seebacher is a co-author of the study that will be presented at the Society for Experimental Biology Annual Conference in Prague on July 2.

Unlike fish and other cold-blooded creatures that have trouble breathing at high temperatures, the cardiovascular system (heart and lungs) of cane toads actually runs better in the heat.

Other species expected to enjoy hotter temperatures include:

Cane toads' hearts and lungs were studied at temperatures between 68 and 86 degrees Fahrenheit (20 to 30 degrees Celsius). As the temperature increased, cane toads adjusted perfectly. Their resting oxygen demands — a measure of how hard the cardiovascular system is working — did not change.

Not only can the toads survive over a broad temperature range, but they prefer higher temperatures. In the study, as the temperature increased, the toads moved oxygen around in their bodies more easily.

"Warmer temperatures are advantageous and there is no indication that high temperatures limit oxygen delivery," Seebacher said. "The impact of global warming doesn't have to be negative. Global average temperatures at present may in fact be cooler than many animals would like."