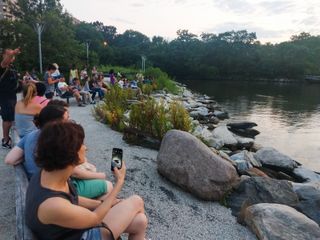 The seal basks on a rock at dusk while its neighbors watch from a respectful distance.
(Image: © Courtesy of Meghan McCarter)

She was seated on a bench near me on June 8 by Muscota Marsh, at the northern end of Manhattan. The critter's head bobbed above the water as a crowd of onlookers formed. The seal floated closer and closer, sometimes darting under the water for an extended period before reappearing a dozen or so feet away. The people looked at the seal, and the seal looked back. After a time, maybe intimidated by the crowd or maybe bored, it ducked under the water and disappeared.

The marsh is part of Inwood, Manhattan's northernmost neighborhood. Local residents have spotted the seal in the marsh and on a nearby floating dock for at least the past two summers. In that time, the creature's become a sort of living local attraction. Since that June 8 sighting, I've spotted the seal basking on a wooden dock near the marsh, and flopping in and out of the water to gasps and cheers from onlookers. Inwood residents share seal updates on social media, and stake out the marsh in hopes of catching sight of the creature. [Beastly Feasts: Amazing Photos of Animals and Their Prey]

"It comes up in conversations, it's something you want on your local to-do list," said Barry Kogan, an Inwood resident and educator with the Bronx-based garden and nature center Wave Hill.

Muscota Marsh, a salt marsh and estuary adjacent to Inwood Hill Park, was restored in 2014 as part of a deal that allowed Columbia University to build a football stadium nearby. Its NYC Parks web page lists the great blue heron and snowy egret among its frequent wild visitors. Still, the seal seems like an unlikely inhabitant of the waterfront between paved-over Manhattan (home to about 1.6 million people, according to the U.S. Census Bureau) and the Bronx (home to an estimated 1.4 million).

But experts in local marine life told Live Science that a seal hanging out in Manhattan isn't quite as strange as it sounds — though it's a bit unexpected to see one make a long-term summer home here.

"It's not that uncommon anymore," said George Jackman, an ecologist with Riverkeeper, a nonprofit organization dedicated to preserving New York's waters. "Seals are quite common in Staten Island [NYC's southernmost borough]. They're in the Rockaways [a peninsula in Queens abutting the Atlantic Ocean]. I've seen them in Pelham Bay [part of the East Bronx]. They're in the sounds. I've seen images of them on floating docks in the Hudson."

That's a big change from a few decades ago, when seals were a much rarer sight in the region.

"Years ago people used to shoot them. People felt that they would compete with them for fish," Jackman said. "Now they're protected. You can't even look at them cross-eyed," Jackman said.

The Marine Mammal Protection Act, passed in 1972 and updated in 1994, made it illegal to harass, feed, hunt, capture, collect or kill aquatic mammals — including seals — anywhere in the waters of the U.S, according to the Marine Mammal Center a marine mammal rescue organization in California. Jackman said the act has helped populations to rebound in the New York City area. The datapoint that best illustrates this rebound, he said, is the number of of seal strandings, which has significantly increased all over the region in the last two decades.

And as seal numbers grow, he said, it makes sense that some seals would start turning up in new and surprising places.

"We're going to see all of them more: more seals, more whales, more porpoises, more dolphins," Jackman said. "But also as they expand their populations, it's all about the ZIP code. It's the same as rent in New York City. The premier spots have the highest rent, and if you can't afford that you go elsewhere, and hit the outer boroughs. So this guy is probably in the 'outer boroughs' of the range."

More prime spots for seals tend to be closer to the ocean, so the Inwood seal, likely a young pup, was probably pushed out of the fancier spots.

Still, he said, it's unusual that the seal has stuck around through the summer. Most seals follow herring populations, which tend to return to river systems and spawning grounds in the winter and spring, then head out to sea as temperatures warm. (One great time and place to see New York City seals, Kogan said, is Pelham Bay in the winter, when large groups can sometimes be spotted laid out on rocks.) [Manatees Are Making a Comeback]

This particular seal seems to have settled into a comfortable niche, likely because it has an abundant food source, Jackman said. A representative for the New York State Department of Environmental Conservation (NYSDEC) told Live Science that improved water quality and reduced nitrogen levels have led to greater bait fish populations in the greater New York marine region, which might play a role in the appearance of predators like seals. The department also noted a broader trend of charismatic megafauna returning to their New York City habitats in recent years.

Jackman said that while Inwood's resident seal is exciting, many other charismatic creatures hang out in New York City.

And the region's natural beauty came long before the steel and skyscrapers, he said.

"New York City was once the Garden of Eden. When Henry Hudson came here and they described the abundance and diversity of life, it was beyond the comprehension of these Europeans," he said, referring to the English captain who recorded his observations of the Hudson River Valley in the 16th century. "And then essentially all the land and the wildlife was clear-cut. And to see it coming back is a wonderful thing."

The main thing for New York residents interested in nature to do, he said, is pay attention and intentionally seek it out.

"Nature's everywhere in New York City. Sure, in Times Square there's going to be less diversity of life. But if you go out to the outer boroughs, we are blessed to have like 20% of the area of the city be parkland and [to be] surrounded by water."

The NYSDEC told Live Science that people should stay at least 50 yards away (46 meters) from seals, and offered the number for the New York Stranding Hotline at 631-369-9829. If an animal does appear stranded, the NYSDEC said, pictures and video can help officials assess its status.

"Life is everywhere. It's like the grass that grows between the cracks in the sidewalk. Life will always be pressing for new places," Jackman said.