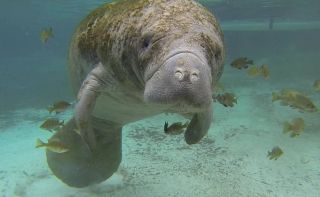 Manatees — the gentle, roly-poly marine mammals once mistaken by sailors for mythic mermaids — have been classified as endangered by the U.S. Fish and Wildlife Service (USFWS) since 1967. But that classification may soon change, and for the best possible reason: Manatees have been making a comeback.

Citing reduced threats and "significant improvements" in both manatee population numbers and their habitat conditions, the USFWS issued a statement on Jan. 7 announcing its proposal to change the West Indian manatee's status from "endangered" to "threatened" under the Endangered Species Act (ESA).

The USFWS reviewed a petition for the status change for 12 months, analyzing scientific and commercial data to determine if the West Indian manatee still met the ESA's definition of endangered, a term that describes a species "in danger of extinction throughout all or a significant portion of its range," according to the statement. A threatened species, on the other hand, is one that is likely to become endangered in the forseeable future. [Marine Marvels: Spectacular Photos of Sea Creatures]

What they found was a rare conservation success story. "Their numbers are climbing, and the threats to the species' survival are being reduced," Michael Bean, principal deputy assistant secretary for fish and wildlife and parks at the Department of the Interior, said in the statement. Working together, a number of agencies, including the USFWS and the Florida Fish and Wildlife Conservation Commission, established more than 50 protected areas for manatees — an effort that played an important part in helping the species recover.

Even the Coast Guard was involved; it worked with the USFWS to patrol the protected areas and prevent trespassing, and to help minimize boat collisions with the manatees.

The West Indian manatee (Trichechus manatus) includes two subspecies: the Florida manatee (T.m. latirostris) and the Antillean manatee (T.m. manatus). In 1967, when manatees were first assigned an endangered status, their Florida populations numbered in the hundreds. Manatee populations worldwide are currently estimated to be around 13,000, and more than 6,300 of those are found in Florida. That represents a 500-percent increase in their numbers since 1991, when aerial surveys of Florida waters counted 1,267 individuals, according to the USFWS's website.

Although the manatee's future looks brighter than it has for decades, the USFWS noted that the status change shouldn't be taken as a sign that conservation work for the species is over. Manatees will continue to enjoy the protection of government agencies and legislation like the Marine Mammal Protection Act, and efforts will continue to further rebuild "sea cow" populations, manage threats and support their role as a "sentinel species," which serve as early warning indicators of environmental disturbances.

"Today's proposal is not only about recognizing this progress, but it's also about recommitting ourselves to ensuring the manatee's long-term success and recovery," Cindy Dohner, the USFWS Southeast regional director, said in the statement.

The USFWS published the manatee status-change proposal in the Federal Register on Jan. 8. A 90-day period follows (ending April 7), during which time members of the public may submit information for the USFWS to review before it reaches its final decision.