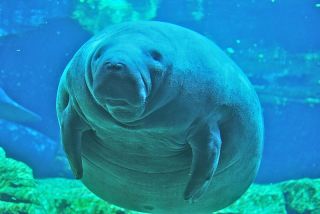 Anyone looking for cheap thrills and a quick brush with nature should reconsider thoughts of riding a manatee. As a Florida woman is learning, multiple federal and state laws can be swiftly wielded in defense of the vulnerable sea cow.

Ana Gloria Garcia Gutierrez, 52, accused of riding a manatee in a waterway in Pinellas County over the weekend, turned herself in after authorities on her trail released photos that appear to show her mid-ride.

The Florida Manatee Sanctuary Act outlaws riding or touching the slow-moving marine mammals. And while Gutierrez wasn't immediately charged, her alleged crime is punishable by a $500 fine or a jail term of up to 60 days, according to the Tampa Bay Times.

There was no immediate indication that federal charges would be pressed, but Gutierrez's alleged offense also would violate the Marine Mammal Protection Act and the U.S. Endangered Species Act, under which she could be subject to thousands of dollars in additional fines for harassing a protected species.

Such penalties may seem outsized for a joy ride on a thick-skinned manatee, which was not thought to have been physically injured in the encounter. But authorities' refusal to regard Gutierrez's alleged crime as harmless whimsy is perhaps acknowledgement that human interactions with manatees are precisely what threaten to end the endangered animal's existence.

The same easygoing and curious nature that would likely predispose a manatee to taking on a human passenger seems to contribute to the species' vulnerability to being mowed down by passing speed boats. [Manatee Mystery: Why Can't They Avoid Speedboats?]

About 87 Florida manatees are killed by humans every year, according to the U.S. Fish and Wildlife Service, most of them dying in boat collisions. And with an estimated Florida population of 3,800 manatees, 87 is a grave number.

Coastal development, which has altered and destroyed manatee habitat, also threatens the species.