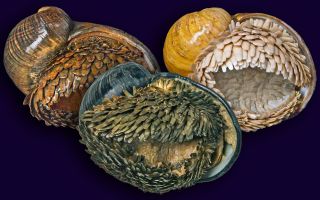 The scaly-foot snail is also known as the sea pangolin for its "armor" made of overlapping scales.
(Image: © Chong Chen)

A sea snail that lives near hydrothermal vents thousands of feet below the ocean surface has a unique solution to navigating such a volatile home: It builds itself an armored shell out of iron.

But while the overlapping rows of the snail's scales may resemble a miniature Iron Throne, they can't protect the mollusk from the looming threat of extinction from humans mining the seafloor where they live.

The scaly-foot snail (Chrysomallon squamiferum), also known as the sea pangolin for its tough plates, is known to inhabit only three locations near hydrothermal vents in the Indian Ocean. Prior studies suggested that the snails' metal armor provides defense against predators and rival snails near these vents, which spew scaldingly hot, mineral-rich water.

On July 18, the International Union for Conservation of Nature (IUCN) listed the sea pangolin as endangered. As the first animal species to be assigned that status due to deep-sea mining, it was a "notable" addition to the list, IUCN representatives said in a statement. [Amazing Mollusks: Images of Strange & Slimy Snails]

Scaly-foot snails, first discovered in 2003, inhabit an area roughly the size of two American football fields, and live at depths of up to 9,500 feet (2,900 meters), scientists recently wrote in a letter, published online July 22 in the journal Nature Ecology and Evolution.

The mollusk's shell consists of three layers: a calcified inner layer, an organic middle layer and an outer layer fortified with iron sulphides, MIT News previously reported. The snails also have enormous hearts, in part to accommodate the oxygen needs of symbiotic bacteria that live in their bodies and provide most of their nutrition, according to the National Museum of Wales.

Little is known about these snails' habits and biology. However, just because they've evolved to survive in a volatile hydrothermal environment doesn't mean that the snails could weather severe disruption caused by seabed mining, researchers wrote in the letter.

Currently, there are no conservation actions in place at any of the vent fields where the snails are found. What's more, two of the three locations that the snails inhabit are already officially cleared for mining activity to begin, and it's uncertain if the snails could relocate to new habitats, according to the letter.

"A 'wait and see' approach — assuming all uncertainty will be resolved by future data — ignores the reality that anthropogenic disturbance is accelerating faster than scientific discovery," the researchers wrote.