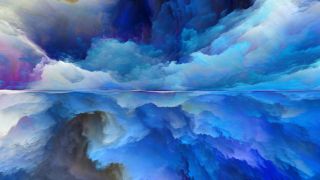 It only takes 20 neurons to turn reality into a hallucination, a new story shows.
(Image: © Shutterstock)

Scientists cut a window into a mouse's brain, then shined a laser on it to trigger hallucinations.

That's weird — but the results of the study, published today (July 18) in the journal Science, were even weirder. Remarkably, the researchers found, while mice have many millions of neurons, or brain cells, the laser light needed to touch only about 20 of them in order to trick the mouse into recognizing a pattern on the wall that wasn't really there.

These results inspired the researchers to ask the rarely uttered question: Why aren't mice (and humans) constantly tripping out?

"A mouse brain has millions of neurons; a human brain has many billions," senior study author Karl Deisseroth, a neuroscientist and psychiatrist at Stanford University, said in a statement. "If just 20 or so can create a perception, then why are we not hallucinating all the time, due to spurious random activity?" [Senses and Non-Sense: 7 Odd Hallucinations]

This incredible mental sensitivity suggests that mammalian brains are perhaps even more finely tuned machines than previously thought, Deisseroth added, capable of responding to exceedingly low numbers of brain cells without getting too distracted by randomly misfired neurons. While the present experiment only looked at the recognition of simple visual patterns, it's possible that more complex mental sensations, like emotions or memories, are likewise controlled by a surprisingly small number of brain cells.

How do you make a mouse hallucinate without, say, slipping it psychedelic drugs? For this experiment, the researchers used a technique called optogenetics — essentially, the insertion of light-sensitive genes into an animal's brain that cause certain neurons to fire when exposed to certain wavelengths of light.

The technique has been used in previous studies to turn mice into hunger-mad "zombies" and to help rats kick their cocaine habit. Here, it was used to learn how mice's brains respond when shown various patterns of horizontal and vertical lines — and to see if those neural responses could be re-created purely by pulsing small groups of neurons with targeted light.

The researchers accomplished this task by carving a literal window into the mice's skulls (complete with transparent glass pane and everything). This surgery exposed the visual cortex — the brain region responsible for processing visual information in both mice and humans. The scientists also inserted genes into the mice to produce two different proteins, one that caused neurons to glow green whenever they were activated and another that caused neurons to fire when exposed to a specific infrared laser light.

Next, the researchers showed the mice a pattern of moving parallel lines and trained them to lick a water spout when the lines were perfectly vertical or perfectly horizontal. Thanks to the green-glowing proteins, the scientists saw exactly which neurons fired when the mice recognized and reacted to the different line orientations. This allowed the researchers to develop a special, 3D "hologram" of laser light that could be fired at precisely the right spots in the mouse brains to target only those neurons involved in recognizing horizontal or vertical lines.

Now, for the "hallucinations." Gradually, the researchers showed the mice increasingly dim projections of the horizontal and vertical lines, meanwhile triggering the appropriate neurons in the mice's brains with their special laser. By the end of the experiment, the researchers stopped showing the mice lines altogether — but, when the laser hit the neurons responsible for seeing horizontal or vertical lines, the mice still reacted by licking the appropriate water spout.

Was this a true hallucination? Did the mice really "see" the invisible lines? It's impossible to know for sure, Deisseroth said in a news article accompanying the study. However, the rodents' brain cell firing and behavioral responses to the laser light looked exactly like they did "during natural perception," Deisseroth said. In effect, the laser light caused the mice's brains to respond to a specific visual stimulus that was not there.

Remarkably, the researchers wrote, they were able to trigger these specific neural responses in their mice by targeting between 10 and 20 neurons — a fraction of a percent of the mice's multimillion total.

"We don't know how many cells it might take to trigger a more elaborate thought, sensory experience, or emotion in a person," Deisseroth said, "but it's likely to be a surprisingly small number, given what we're seeing in the mouse."