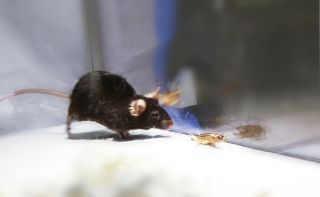 Scientists isolated neurons in mice so that they would hunt and bite almost anything, ranging from crickets to bottle caps.
(Image: © Courtesy of Ivan de Araujo)

The next season of the hit TV show "The Walking Dead" could include "zombie" mice now that scientists know how to switch on the rodents' predatory kill instinct.

In a new study on mice's brain circuitry, researchers isolated neurons that cue the animals to pursue prey. The scientists also isolated a set of neurons that triggers the mice to bite and kill. Using optogenetics, a way of isolating and engineering neurons to fire when stimulated, the researchers made the mice take on these zombie-like qualities.

In the study, the mice would hunt and bite almost anything, ranging from crickets to bottle caps, when stimulated by a laser in their cage, said lead investigator Ivan de Araujo, an associate professor of psychiatry at the Yale University School of Medicine. However, the mice did not attack one another.[Zombie Animals: 5 Real-Life Cases of Body-Snatching]

"We'd turn the laser on, and they'd jump on an object, hold it with their paws and intensively bite it as if they were trying to capture and kill it," de Araujo said in a statement.

Predatory hunting is common to most jawed vertebrates, but the way the brain controls the behavior was largely unknown. Because predatory abilities would have played a role in the evolution of the brain, a primordial pathway in the mouse brain must connect to biting, de Araujo said.

While the scientists found that hungry mice would pursue prey more aggressively, the researchers could isolate certain neurons that would trigger the mice to hunt only and not go in for the kill. By specifically lesioning each type of neuron, The researchers also found that when they lesioned the biting and killing neurons, the animals would pursue but not kill. In fact, mice with lesions consistently had a deacreased jaw biting force, up to 50 percent weaker than mice without lesions.

The researchers said they will next explore how the two neuron sets (pursuit and kill), are coordinated.

"We now have a grip on their anatomical identities, so we hope we can manipulate them even more precisely in the future," de Araujo said.

The study was published online Jan. 12 in the journal Cell.