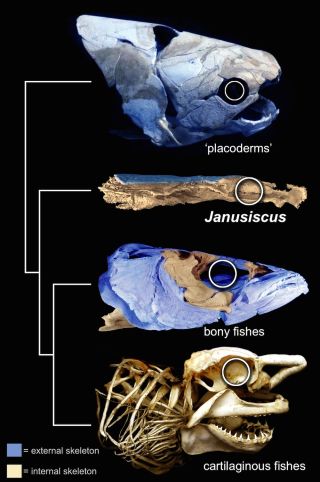 The 415-million-year-old fish fossil (Janusiscus schultzei) has a well-developed external skeleton (shown in blue), a feature that is seen in the common ancestor of bony fish and cartilaginous fishes, such as sharks.
(Image: © Sam Giles. Placoderm image courtesy of K. Trinajstic)

The remains of a 415-million-year-old fish skull from Siberia — though miniscule in size — offer hints about the origins of all jawed vertebrates, ranging from reptiles to humans, a new study finds.

Researchers originally uncovered the roughly 0.8-inch-long (2 centimeters) skull in the 1970s, and classified the specimen as a bony fish. There are two main types of living jawed vertebrates: those made of bone and those made of cartilage. Now, a new, more in-depth examination of the ancient fish's brain case shows that the fossil has characteristics of both bony fish, such as salmon and trout, and fish made of cartilage, including sharks and manta rays.

The Siberian fossil also suggests that sharks — which are made of cartilage and long thought to be more primitive than bony-jawed vertebrates — are more evolved than had been previously thought, the researchers said. [See photos of the ancient Siberian fish skull]

"It's a very interesting fossil, and it's very small," said Sam Giles, the study's lead researcher and a paleobiology doctoral candidate at Oxford University in the United Kingdom. "It's surprising that something so tiny could have so much information in it."

The researchers named the new genus Janusiscus schultzei, for "Janus," the Roman god of doorways and transitions, who is often depicted with two faces, and the Latin "piscis" for fish. The species is also named for Hans-Peter Schultze, of the University of Kansas, who first described the fossil in 1977.

Giles and her colleagues used a specialized computed tomography (CT) scanner to look at the skull, which was still embedded in rock. They imaged the fossil hundreds of times from different angles, allowing them to create a 3D model.

The incredibly detailed scans show that the fish has sensory line canals on its skull. Bony fish use these canals, located on the outside of the body, to sense changes in pressure around them and avoid predators.

But the skull also has features characteristics of fish made of cartilage. The scans showed that there are blood vessels at the bottom of the ancient fish's brain case, located inside the skull, above and between the jaws,that supply the brain with oxygen. The blood vessels are something that "is a lot more like [what] you would see in a cartilaginous fish," Giles told Live Science.

Although bony and cartilaginous fish had a common ancestor, they split apart around 420 million years ago, Giles said. The Siberian fossil is likely one of the common ancestors of the two groups, and may provide clues as to what the animals' earliest common ancestor looked like.

"There are over 60,000 species of living jawed vertebrates, and they encompass pretty much everything you can think of [with a backbone] that lives on land or in the sea," Giles said. "But we don't really know what they looked like when they split."

Moreover, researchers have long believed that the common ancestor of bony and cartilaginous fish had more cartilage than bone, Giles said. This would mean that vertebrates made of cartilage, such as sharks, would have evolved less over the ages than did bony creatures.

"But what this animal tells us [is] that actually the last common ancestor of the two groups had lots of bone," Giles said. "So rather than sharks being primitive, sharks are actually very highly evolved in their own way, and just as highly evolved as we are."

The new findings are "truly remarkable," said John Long, a professor of paleontology at Flinders University in Adelaide, Australia, who was not involved with the study.

"I think it is a highly significant discovery, as the origin and diversification of modern bony-jawed fishes is still shrouded in mystery," Long told Live Science in an email. "But Janiusiscus takes us a big step closer to really understanding this major evolutionary transition, from primitive jawed fishes to the beginning of the modern jawed fish fauna."

Ironically, though the species may be one of the earliest common ancestors of jawed vertebrates, its jaw is missing from the fossil. "Presumably, the jaw is in a middle of the river somewhere in Siberia," Giles said.

Perhaps researchers will find it one day, or at least another fossil with similar features.

"Its frustrating for most of us paleontologists that we just have only the brain case and part of the skull roof," Long said. "It would be nice to know about its jaws, teeth and cheek plates, but that must await further discoveries to fully understand the anatomy of Janusiscus."

The study was published today (Jan. 12) in the journal Nature.