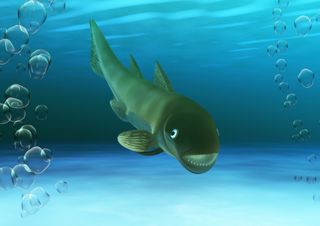 A new species of marine fish, illustrated here, was discovered in Teruel, Spain and lived more than 400 million years ago.
(Image: © SINC)

The fossilized remains of a 408-million-year-old fish species have been found in Spain, a study reports.

Researchers found scales, spines and shoulder bones of the new species (Machaeracanthus goujeti) in the town of Teruel and to the south of the city of Zaragoza. The fish lived during the Devonian period, and is a spiny shark (Acanthodii), an extinct type of fish that resembles both sharks and bony fish.

The discovery "expands our knowledge of the biodiversity that existed on the peninsula 408 million years ago, when the modern-day region of Teruel was covered by the sea," study researcher Héctor Botella, a paleontologist at the University of Valencia, Spain, said in a statement.

But bones in the spiny shark group usually grow differently than the ones found here, suggesting the new species might be even more like sharks and arose during the diversification of jawed vertebrates.

Most of the fossil samples were from juveniles. The researchers estimate the biggest of these fish would have been less than a meter (3.3 feet) long.

The researchers also analyzed fossils from the Lower Devonian period in northern Spain and western France, which were first thought to come from the Machaeracanthus species.

The new fossils are now kept in the Paleontology Museum of Zaragoza, Spain. The findings were reported in the December 2012 issue of the journal Geodiversitas.